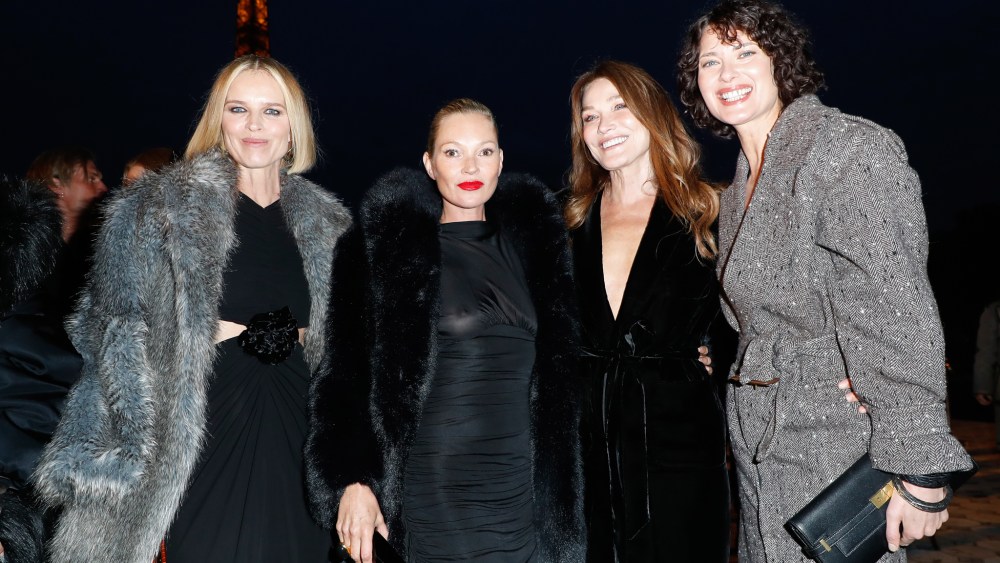 Kravitz’s been a face of the house for the better part of six years, and formed more than a friendship with designer Anthony Vaccarello over that time.

“It feels like I’m going home. I feel like I’m with my family now,” she said as she took her front row seat. “I’m excited to see what he’s created. It’s incredible that he steps it up and blows my mind every time. He’s just a creative person. Fashion is all about creativity and he takes inspiration from all over. It’s more than just clothes and fabric, it’s really his spirit that we’re watching.”

As for taking the helm of her upcoming film, it’s been a learning curve for the actress, who grew up in front of the camera.

“It’s like going to school. You learn a lot about what it takes to make a film. It’s pretty wild,” she said. “I will never be the same on a movie set again.”

It might be a bit of a tease to show a collection of sweater dresses and full-length duster coats (and for spring no less) to an audience full of celebs in miniskirts on a blustery autumn night. But that’s exactly what Vaccarello did with Blackpink’s Rosé and Hailey Bieber wearing minis in the front row.

After the show, Bieber declared the outerwear her favorite. “I loved it,” she said, declaring she wanted “Everything — all the jackets especially.”

The model hugged singer Charlotte Lawrence and her mom Christa Miller. “Everybody all in one place!” she exclaimed of catching up with her friend from L.A. Bieber planned to go to the after party, but only after an outfit update. “I’ll probably get out of my heels,” she said.

Rosé also declared the outwear her favorite. “Amazing, I loved it,” she said. “I loved all the long coats, they were stunning.”

The trio of the original supers including Kate Moss, Amber Valletta and Shalom Harlow chatted on the terrace at the foot of Place du Trocadéro that was built for the show. Moss, giving air kisses to friends, had a fashion emergency when her oversize earring broke off. Being the pro she is, Moss took off the other earring and flipped up the collar of her faux-fur coat to make a different style statement.

“Stranger Things” star Natalia Dyer took in the view of the Eiffel Tower, which served as a backdrop of the runway. “Oh, this old thing,” she joked of the moment. “It’s kinda unmatched.”

She’s taking time off after wrapping the fifth and final season of the series, as well as indie film “All Fun and Games.”

“I’m currently focusing on a little bit of life things, because you’ve gotta do that, too,” she said of taking a breather. “It’s important to have balance.”

Got7’s Mark Tuan attended his first fashion show last September. He’s now become a front row regular and is trying to up his style game. “I mean, I’ve tried to,” he said. “I try all the time. I’m trying to dress up a bit more these days.”

He’ll fly back to Los Angeles to start his first solo tour next week. The K-pop star has been working with a stylist to design the costumes, which he said are not as sleek as the YSL suit he was wearing but “full of colors.”

“I’m by myself on stage, but we have some surprises,” he said of his first time touring without his group. “I mean there’s nerves, of course, and a little bit of excitement.”