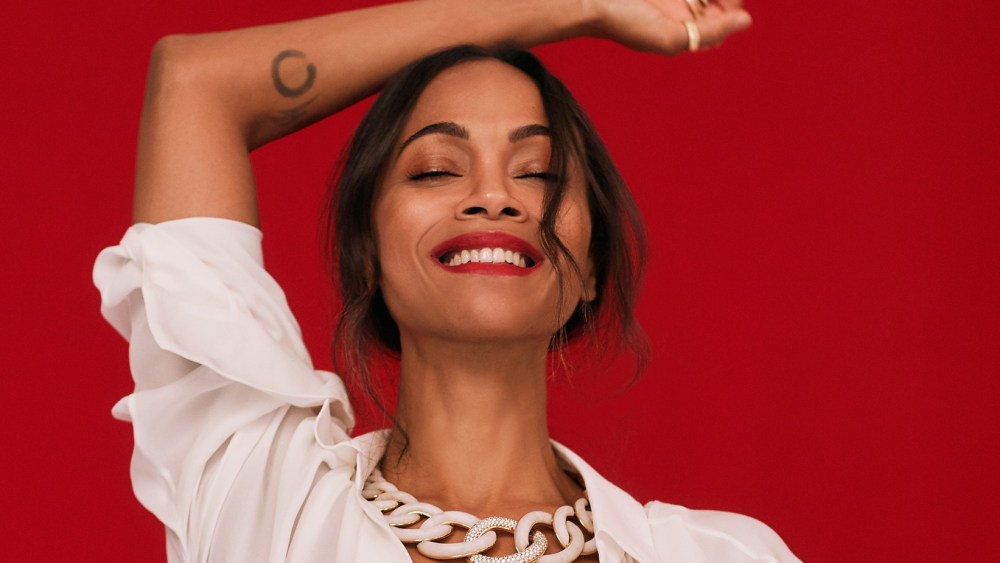 If you thought you were busy, you haven’t been paying enough attention to Zoe Saldaña. The actress is a name probably associated first with “Avatar,” the 2009 James Cameron behemoth that would become the biggest movie in the world. But she’s also part of “Avengers” and “Star Trek” and wasn’t she in that Netflix series you bawled your eyes out to the other week? And isn’t “Avatar” finally returning with a sequel in December?

Saldaña is a powerhouse actress who, over the course of her career, has evolved from her breakout in the ballet drama “Center Stage” to becoming one of the highest-grossing actresses on movie screens today. With her roles in the franchises of “Avatar,” “Avengers” and “Star Trek,” Saldaña has been in three of the five top-earning movies of all time (“Avatar” and two “Avengers” movies) and has become a fixture in the sci-fi action movie world.

Yet all the time in the world’s biggest movies has left her with very little room for anything else — something she’s started carving out for herself lately. That includes this fall’s “Amsterdam,” the David O. Russell ensemble cast comedy, which was not particularly widely viewed, and the Netflix series “From Scratch,” which very much was. (It has consistently been one of the streaming platform’s most watched series since it debuted in late October.)

Come December, Saldaña has “Avatar: The Way of Water” and, in May, the third installment of “Guardians of the Galaxy” will debut. There’s also the “Star Trek” franchise, in which she plays Lieutenant Uhura, which will return at some point, and the additional “Avatar” films she’s committed to.

“There was a time where it was so exciting to seem [like I was] and to know that I was one of the hardest working people,” Saldaña says. “Now I’m actually embarrassed because this whole idea of productivity and overproducing yourself too much is just a lot.”

Despite that, Saldaña exudes energy, focus and drive. She’s extremely personable and intentional in how she speaks, and any symptoms of tiredness are well hidden.

She’s at work on “Lioness,” an upcoming series from “Yellowstone” creator Taylor Sheridan that Saldaña is leading and coproducing alongside Nicole Kidman. The show has had her based in Baltimore, Maryland, since late August, though production will halt for nearly a month while she heads out on the “Avatar” press tour, which involves stops in South America, Europe and Asia.

“‘Avatar,’ it’s just my baby. It’s everybody’s baby. And to see this baby now being a teenager, like a young adult and getting to share it with the world is just…I felt like this day would never come and it’s finally here,” she says.

“Avatar: The Way of Water” comes 13 years after the original and offers the chance to introduce a whole new audience to the world of Pandora — a thrilling task for Saldaña and the cast.

“The reintroduction is also the refreshing of it. The rejuvenation of it is also very exciting,” she says. “Look, I’m not aiming to get the same results that we got in the first one because that was a surprise. That was a wonderful surprise. We were not expecting it. And the reception was just imaginably beautiful. Obviously I’m hoping for ‘Avatar 2: The Way of Water’ to have a very beautiful impact on people. But it’s not for the sake of breaking any records or making a ton of money. I think this saga is special. It was made with a lot of love and a lot of work. And it’s an experience worth having.”

It’s naturally an entirely different world 13 years after the first “Avatar” movie was released, and the moment of course leads to reflection on how Saldaña’s life and career have changed in that time.

“In terms of the way that I approach work, I seem to have gone back to the way I started, which is just to give 120 percent and do the homework and go to bed early and focus on my work. But after ‘Avatar,’ when you’re young and all of the time you have, the opportunity to travel and to go to lavish dinners and wear beautiful outfits and the nightlife became very attractive,” she says. “It was a lot of working hard and a lot of [playing] hard that sometimes got in the way of me feeling fully, fully proud of the work I was doing — because I did the work. And now that I’m a little older and I would like to consider myself a little wiser, it’s going back to that [feeling] of having those healthy boundaries for myself of ‘go to bed early, really work. I know you’re tired. I know you really want to go out and go with your kids and just say, “F–k my rehearsal and f–k my practice and f–k this session.”‘ But I don’t. I still manage to focus on family life and also focus on my work. And I feel good.”

It’s an “all hands on deck” moment for Saldaña and her family, which includes her artist husband Marco Perego Saldaña and their three sons, ages five and seven-year-old twins. Their parents have been called in for support, and they’ve talked with their kids about how hectic the coming months will be for mom.

“You don’t get to have many choices. Timing sometimes is everything. It’s a seasonal control of power: sometimes seasonally we’ll have more control of your time and other times your time will be in the hands of others or other operations,” Saldaña explains. “COVID-19 did play a role in this in the sense that the projects that I was committed to, in addition to the sequels that I have obligations to fulfill, were crunched because things had to push around and adjust around the pandemic. And so I knew almost two years ago that it was going to be a hectic two to three years. And we sat down and my whole operation and I, which is my husband and my sons, and it’s like, ‘Well, is this something that we can do?’ And so you have that sort of dilemma.”

Saldaña has been experiencing another dilemma, a creative consequence of being attached to such high-profile blockbusters.

“I feel that for the last 10 years of my life, I’ve been just stuck. I felt stuck doing these franchises,” she says. “I’m very grateful for the opportunities that they provided, from collaborating with amazing directors and getting to meet cast members that I consider friends and getting to play a role that fans, especially children, love. But it also meant that I felt artistically stuck in my craft of not being able to expand or grow or challenge myself by playing different sorts of genres and different roles. So this is something that I wanted to do for a very long time. And wrestling, too, with this pressure that society puts on women that your youth is gone as soon as you have children and you go into your 40s.

“But today, now that I’m 44, I’ve been able to have these opportunities, and I took control over my aging and I took control over my voice and how I consider myself as a woman. And I’m so happy that I’m able to collaborate with filmmakers and producers and people in this industry that want that for women, that want women to be ageless and who don’t fetishize women’s youth. And so it’s interesting. It’s really interesting.”

Filling that order is “From Scratch,” based on the memoir by Tembi Locke about her travels to Italy, her love story with her husband, his battle with cancer and, ultimately, his death. Saldaña had been craving a love story project, and even though Locke’s is a sad one, she didn’t shy away.

“You know what I loved — I loved that so many people were so brave to stick through the whole show, even though they knew they were going to just open themselves up and hurt and just find themselves living in that feeling and that sensation of complete sadness and seeing, and they still did it,” Saldaña says. “I really do consider ‘From Scratch’ to be a beautiful love story that has an unconventional [ending].…The ending that’s full of hope and joy and happiness and purpose.”

At a certain point, even being an action star begins to feel like riding a bicycle, and Saldaña is now in her moment of seeking out discomfort.

“‘From Scratch’ scared the living s–t out of me,” Saldaña says. “And ‘Lioness’ did as well.”

Sheridan first called her in 2020 about the project but with the recent death of her grandmother and the ongoing, still fresh pandemic, she wasn’t in the right space to consider a challenge. Then, while in Italy shooting “From Scratch,” she texted him.

“And I’m happy. I’m so happy I did it. I’m tired and every day I wake up with a lot of panic, but I do the work and I get there and every day I come home and I’m like, ‘no matter what happens, I did my best. I gave it my all and it feels good.’”