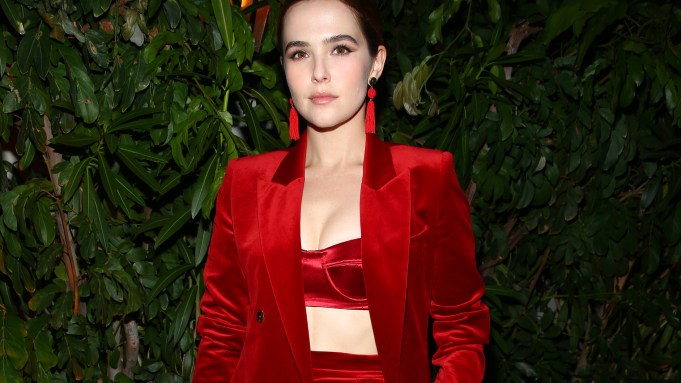 Zoey Deutch, this year’s recipient of the Women in Film Max Mara Face of the Future Award, has plenty to say for herself, and she’s quite efficient to boot.

“I should really apologize in advance because I talk like 5,000 words a minute,” the 23-year-old actress said. “It’s a trait I’m well aware of.”

Deutch is kicking back at the Sunset Tower hotel in Los Angeles, having just attended a lunch on behalf of Max Mara. “I’ve been coming to the event for a few years and I’ve really admired how much Max Mara has empowered women in the art world,” she said. “The right outfit can feel like a suit of armor and Max Mara does a really good job of making you feel powerful. They also make you feel elegant. That red coat I just wore for a photo shoot is like a ginormous chic blanket that I would love to live in for eternity.”

Of her Women in Film honor, she said, “It feels very early on in my career to be given an award like that, but it’s exciting to be looking forward because it’s about potential and what’s ahead. So more than anything I’m excited to keep working to earn that honor. It’s a nice encouragement.”

Elizabeth Banks, who this year received Women in Film’s highest honor, the Crystal Award, was herself a Face of the Future eight years ago. “Zoey, you got eight years,” she told Deutch. “Eight years before they give you the old lady award.”

Aging in Hollywood shouldn’t scare Deutch. Her mother Lea Thompson, star of John Hughes’ “Some Kind of Wonderful” and the “Back to the Future” franchise in the Eighties, still gets in front of and behind the camera with regularity. “I literally come from a family of women in film. My mom’s an actor and director, my sister’s a writer and actress, so to be a part of another family is really cool,” she said.

After two days of festivities, Deutch is heading back to New York to continue filming the Netflix movie “Set It Up.” “We get to shoot at all these iconic New York locations like Yankee Stadium, the High Line, Radio City Music Hall. And it’s an all-female crew.”

Her next film to hit theaters is “Rebel in the Rye” with Kevin Spacey, out in the fall, then “Flower,” written and directed by Max Winkler (son of Henry), with Kathryn Hahn and Adam Scott. “It’s a genre-less movie, but tonally more like a dark comedy. It’s quirky and weird, very me. It was the first movie to sell at the Tribeca Film Festival this year,” she said.

Of her moment in the spotlight, she said, “I’ve spent the better part of my life trying to get on the stage and in the spotlight and every time I am, I’m like, ‘Oh my god, this is scary.’ I just have to remind myself, ‘This is what you want, so embrace it.’ There are much scarier things in the world.”