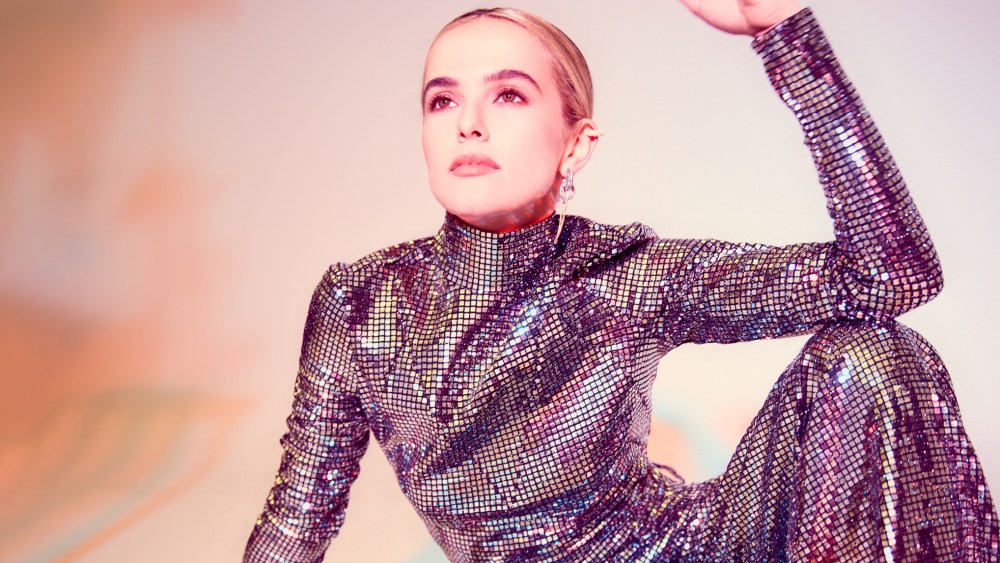 “It’s a weird sentence to say, but I only remember a time in my life where I also existed online,” says Zoey Deutch. It feels like it should be an admission, but it’s said matter-of-factly, without any guilt.

And while many shame themselves for social media use, Deutch’s weekly screen time is now paying dividends, thanks to her new movie “Not Okay,” which explores the downfalls of influencer culture.

“I’m in a generation that had it at like 12,” Deutch, now 27, continues. “So it’s very much a part of my life. I have friends who are only like four years older than me and because they only got it when they were around 16, it’s not as ingrained in their brain. I think having it at 12 versus 16, or having it at 12 versus 18, is very different. They feel like it’s something that is forced, and they have to be convinced into posting — whereas it’s very much part of my life, for better or worse.”

“Not Okay” is a look at the ‘for worse’ side of social media. In the movie, out now, Deutch plays Danni Sanders, an aspiring writer who, in a desperate search for online fame and popularity, fakes a trip to Paris via her social media only to have it all come to a head when, while supposedly in Paris, a terrorist attack hits the city. She then capitalizes on being a “survivor” of such a traumatic event, and her lie spirals out of control as her fame grows. The film is written and directed by 27-year-old filmmaker Quinn Shephard, who sent the script to Deutch with her in mind to both act and produce.

“I was, at the time, shooting a period piece called ‘The Outfit’ that was very serious, and very contained, and very still. And so I read this and this seemed really exciting and different than what I was doing at the time,” Deutch explains.

Sanders is, bluntly, not a very likable figure, as an extremely self-absorbed Millennial white woman who cannot for the life of her see beyond herself. While Deutch prefers the food-influencer-filled corner of the internet, part of her entry point into understanding Danni was that she doesn’t find her as unlikable as the rest of us might.

“I mean, it’s always hard, even though I’ve been asked this 1,000 times. I don’t know why I don’t have a clear, concise answer — probably because I didn’t dislike her,” Deutch says. “She is misguided and she makes a lot of bad decisions, and I think she is a real product of her environment. And I think she is the smoke, not the fire. I think the part about her that makes her, in other people’s eyes, unlikable, is that she’s lacking self-awareness. So that was the quality of her that I was really tapping into. None of it is initially coming from malicious intent and it isn’t calculated. She’s not a sociopath. She’s just completely privileged, entitled and has no self-awareness.”

Deutch defers to her parents on the subject, but she’s pretty confident she’s always wanted to be an actor. The daughter of “Back to the Future” star Lea Thompson and director Howard Deutch, known for “Pretty in Pink” and “Some Kind of Wonderful,” Deutch grew up around the business, and knew from a young age she wanted to follow in her parents’ footsteps.

“My mom, I think, knew very early on that this was what was going to happen. This was my path, and she was really supportive of it. And I think my dad was a little bit more nervous, and wanted me to go maybe a more academic route at first and then see where it took me,” Deutch says. “But once I started working and he saw that this could be a thing that lasts, then he was very supportive. Understandably, he was nervous. He’s seen a lot.”

Deutch will next be seen in Hello Sunshine’s “Something From Tiffany’s,” a holiday rom-com, and will reconnect with her “Set It Up” writer Katie Silberman for a new Netflix movie, “Most Dangerous Game.”

“I don’t wait for the next thing. I just keep working behind the scenes and trying to get things going, and keep hustling. And I think the unknown is not ideal, but it’s so much a part of the journey, that you have to find ways to enjoy it, make the best of it,” she says. “Spend time with your loved ones, and your dogs, and cook, because you never know when you’re going to be gone for another five months. It’s a very strange thing. You have one plan one day, and then the next it’s completely turned on its head, and there’s something really exhilarating in that also.”

Immediately on her agenda? Some time away from the phone.

“I think Quinn and I both have said that unfortunately, we’ve spent more time on social media as a result [of the movie],” Deutch says. “We’re both due for a social media cleanse.”