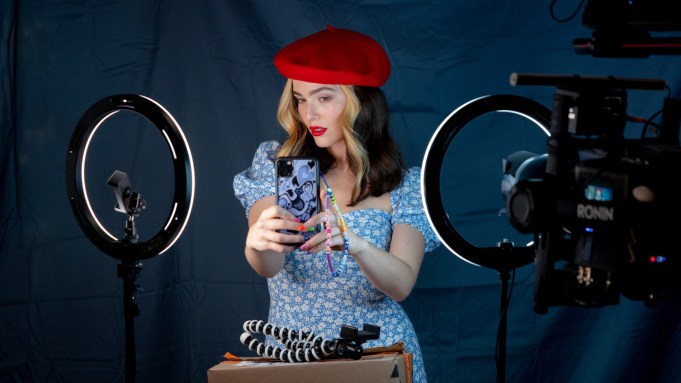 Zoey Deutch and Dylan O’Brien (who costar in “The Outfit”) will reunite on screen for “Not Okay,” out on Hulu on Aug. 5, WWD has learned exclusively.

Writer-director Quinn Shephard is behind the project, in which Deutch plays Danni Sanders — a fame-seeking, wannabe influencer who fakes a trip to Paris to up her social media game. After an incident takes place, the story unravels.

“I wrote the first draft of this script for Makeready in 2018, right around the ‘Summer of Scam’ and during an explosion of anxiety on the internet,” Shephard told WWD. “I found myself deeply affected by the endless scroll through headlines of violence and political news, mixed ceaselessly with influencer scandals, cancel culture and sponsored ads for teeth whitening that will somehow make you forget that the world is burning.”

Writing “Not Okay” was a way for her to cope with the “emotional information overload,” she went on, “and use satire to critique it.”

The film found a home with Searchlight and Hulu in 2020, with Deutch set to star.

“Zoey was always my first choice for Danni, because she is one of those actresses who can play a character who is absolutely satirical and does very questionable things and yet still feels like a real, relatable person,” Shephard explained. “’Not Okay’ is a provocative, boundary-pushing film that I think scared a lot of people in the industry, but Zoey was super down for the challenge of playing this character and was just fearless about it.”

Of O’Brien, she added: “Likewise, casting Dylan as Colin worked so beautifully for a similar reason. Colin is the most heightened character in the film. He represents everything Danni thinks she wants when it comes to being internet famous. On my first call with Dylan, he had so many brilliant ideas about how to play the character. He really embraced both the absurdity and underlying griminess of the role.”

Working with costume designer Sarah Laux, the film’s mood boards were “immediately full of Instagram micro-trends, Emma Chamberlain nails, TikTok money piece hair and Y2K influence,” noted Shephard of the protagonist’s look. “Danni is a character who doesn’t like her life as an adult very much, so she loves trends that make her feel like she’s in middle school again, which perfectly lined up with the shift toward Y2K fashion that was just starting in summer 2021 when we filmed.”

While claiming to be in Paris, the character’s outfits incorporate cliché accessories like a red beret, and as her social media influence rises, her wardrobe is full of trendy, Instagram-popular fashion items — a Miaou corset, a Kim Shui dress, House of Sunny pants, the Prada “Re-Edition” shoulder bag.

With Colin, “his fashion is all about flashy name brands and flex culture,” revealed Shephard. “Danni and Colin’s world is super contrasted with the character of Rowan, [played by Mia Isaac], who is a really grounded and authentic character with her own sense of style that doesn’t stem from trends at all.”

She continued: “Without giving too much away, ‘Not Okay’ is all about the mega contrast between the two very different sides of our culture online right now, which is reflected both in the visual style and emotional arc of Danni and Rowan.”