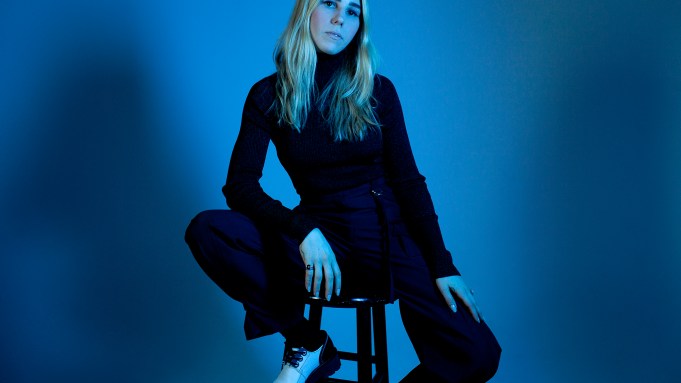 Zosia Mamet hopes we all fall in love again with romantic comedies.

In her latest project, “The Boy Downstairs,” the actress plays Diana, a New Yorker who unwittingly moves in above an ex-boyfriend after having broken his heart. The script, written by 28-year-old filmmaker Sophie Brooks, immediately struck Mamet as having the qualities of “old school” romantic comedies, a genre she says has fallen by the wayside.

“I love films like ‘When Harry Met Sally,’ ‘Annie Hall,’ ‘You’ve Got Mail,’” explains Mamet. “I feel like that genre has been a bit lost. We’ve all gotten very, very cynical. We wanted to make a movie that felt real and is funny, but also tugs at your heartstrings.”

Although now married, the 30-year-old sees how technology has changed the way romantic connections are developed in the insta-swipe era of matchmaking. “A lot of the magic has been sucked out of dating with the Internet,” she opines. “It’s very sterile now [and it’s all about] ‘if your stats match with my stats then we’ll meet at this place at this particular time.’ The structure of a romantic comedy doesn’t really apply that much to real life, but I also feel that’s why [the genre] is so important now.”

Off-screen, Mamet’s own journey to romance with now-husband Evan Jonigkeit could easily be written as a romantic comedy: two actors meet in the cast of a small off-Broadway production, quickly fall in love and then go to great pains to hide their budding romance from their costars.

“Evan and I were both in a production of ‘Really Really’ at the Lucille Lortel [Theater],” explains the daughter of playwright David Mamet. “Everybody knew we were in love and we just told them they were all crazy and unprofessional, but we had basically been living together. I’d leave the theater and walk one way, he’d walk another and we’d meet on this one corner to walk home together. It was totally like a rom-com.”

The pair even went to the lengths of identifying each other by fake names in their cellphones: Mamet was entered as Italian actress “Silvana Mangano,” a boyhood crush of Jonigkeit’s, while her clandestine beau went by “Marcello Mastroianni,” a onetime lover of the late Mangano. “He’s actually still under that name in my phone,” she admits.

In an age when so much of our lives are on view via social media, the couple insisted their love blossom without chatter from others. “There’s always this idea of people falling in love while working together — especially actors — and the reality of the feelings is often brushed off. We just wanted it to be ours so we decided not to tell anybody.”

Mamet runs her hands through her blonde locks, exposing the outline of a heart tattooed across her right palm. “I don’t have tattoos anywhere I can’t see them,” she explains. “I got this right around the time I met my husband. We dated secretly for the run of the show, but finally got caught about 10 days before closing.”

When the couple eventually married in October 2016, Mamet had just wrapped production of the sixth and final season of HBO’s “Girls,” a transition from which she’s now finally adjusting. “It’s good and bad at times and I still get sad and miss those amazing humans I worked with and playing that character, but it’s also very exciting to be in this new frontier of my career.”

Contemplating her next professional step, Mamet recalls working on the Emmy-winning series as “a complete joy.” “I got so spoiled working on that show,” she admits of her ongoing challenge to find similarly satisfying projects. “It’s been hard to find something that really lights my fire in the same way.”

She gazes down momentarily at her shoes, a pair of spotless black-and-white creepers from a yet-to-be-released 3.1 Phillip Lim collection. “Aren’t they great? They feel like what I would wear in my daily life, but just a little cooler. I sort of wish I was born in Britain for the punk era. That’s where my soul is.”

A self-described “workaholic,” the actress and Jonigkeit recently formed a production company, which she says “keeps my creative fire stoked while I wait for the next perfect thing to come along. Plus, I get to work with my husband. It’s almost like transcending to a deeper level because we’re already connected on such a deeper level.”