The 29 year-old singer-songwriter discusses what she's learned so far about creating music, and why being in love doesn't change the process. 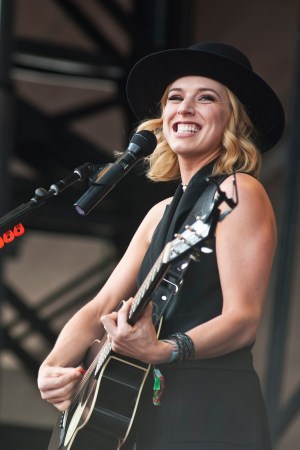 “I’m a lot more confident now than I’ve ever been before,” says ZZ Ward, the 29 year-old musician already likened to Tina Turner and Aretha Franklin. “I toured extensively for three years, and it really makes you feel free and comfortable in your own skin.”

Ward — born Zsuzsanna but who goes by the moniker given to her by family and friends — is calling in from L.A., where she’s resting up ahead of Aug. 28, when she’ll launch her EP and tour, both titled “Love & War.” “It’s crunch time right now,” she says.

Ward was born outside of Philadelphia but grew up in Southern Oregon — living in the small town of Roseburg and attending school in the even smaller Glide — where she was raised on her parents’ collection of Muddy Waters and Big Mama Thornton. “Blues was my first exploration,” she says. “I loved the sincerity of the artists. I love the power and the simplicity of the blues.”

Turning such sincerity into her own came naturally. “I always had a really good voice, from the time when I was a little kid,” she says. “My dad noticed I could sing and he would harmonize with me in the car — that’s probably why I stand up and share my gift with people.” That gift translated to her mixtape “Eleven Roses” which released in 2012 and was followed by her debut album “Til The Casket Drops” later that same year.

The slow build of success has come from a personal well of songwriting. “Having fans on my first album and feeling this resonance from people, that they liked my intimate and vulnerable stories, that they connected with that, that inspired me when I went back into the studio,” she says.

The full-length album that drew her back into the studio, “This Means War,” is coming early next year, from producer S1, who has worked with Kanye West, Beyoncé, Madonna, and Eminem.

“With the first album it was so easy for me to talk about it, because I was so far removed from the feeling of what that album was about,” she says. “But I’m still kind of in the same place as when I wrote this album. It’s so authentic to all the things in my life every day.”

That authenticity seems to be working for her. “I had a fan who came to three shows in a row, and at the last show, in New Orleans, she showed me that she had a line from one of my songs tattooed on her shoulder. These stories that I’m writing about what I’m going through in my life, that someone wants that on their body for the rest of their life is incredible.”

After years of touring off of her debut album, “Til The Casket Drops,” she found herself having to press pause in hopes of generating something new. “I had been moving so fast on the road — I really had to slow down for a second, and get off the road.” Once she did, “it started flowing really easily.”

The ZZ Ward who wrote the new album was in an entirely different mind-set. “On the first album, I was heartbroken and insecure and had all these doubts,” she says. When it came time to craft the new record, she was, perhaps unexpectedly, in a relationship — which challenged her songwriting approach. “I was in a relationship, but I realized nothing had changed within me. Even when you’re in love there’s still a war you’re fighting inside yourself,” she says. “What’s expected of you is to be in love and be domestic, but you’re also an independent person.”

On Saturday, she’ll play the inaugural Billboard Hot 100 Festival, though such large venues tend to cause some stress. “When you have your own show, the audience is committed to you,” she says. Larger crowds mean “a lot less control.”

They are, however, something she’ll likely need to get used to.