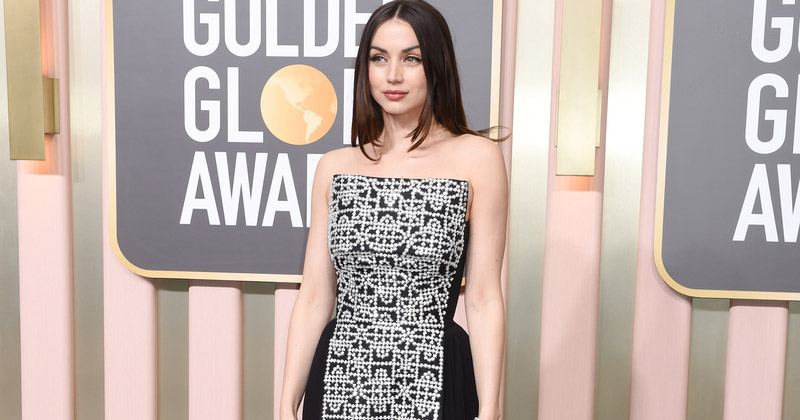 The dress was conceived as a two piece with graphic lines on the front. The structured front panel was embroidered with 3D sequins in a geometric pattern. The back of the dress was made with pleated black silk with a train to add volume to the silhouette.

According to Louis Vuitton, 150 hours went into completing the gown. It incorporated 25 meters of silk for the back train and 800 sequins were used for the embroidery.

For makeup, de Armas went for an evening-ready look featuring a matte lip, a touch of blush, earth-tone eyeshadow and wingtip eyeliner. Her hair was parted down the middle in a straightened style.

De Armas was nominated for Best Actress in a Motion Picture – Drama for her role in “Blonde” as Marilyn Monroe. The award ultimately went to Cate Blanchett for “Tár.”

The 2023 Golden Globe Awards honors outstanding performances and work in film and television. This year, Variety, which is also owned by WWD parent company PMC, is hosting the pre-show as an official partner with the Hollywood Foreign Press Association. The ceremony, held Jan. 10 in Los Angeles, was hosted by actor and comedian Jerrod Carmichael. Some of the nominees include Austin Butler, Cate Blanchett, Daniel Craig, Michelle Yeoh, Brad Pitt, Angela Bassett, James Cameron and Zendaya. Eddie Murphy will receive the Cecil B. DeMille Award and Ryan Murphy will receive the Carol Burnett Award.