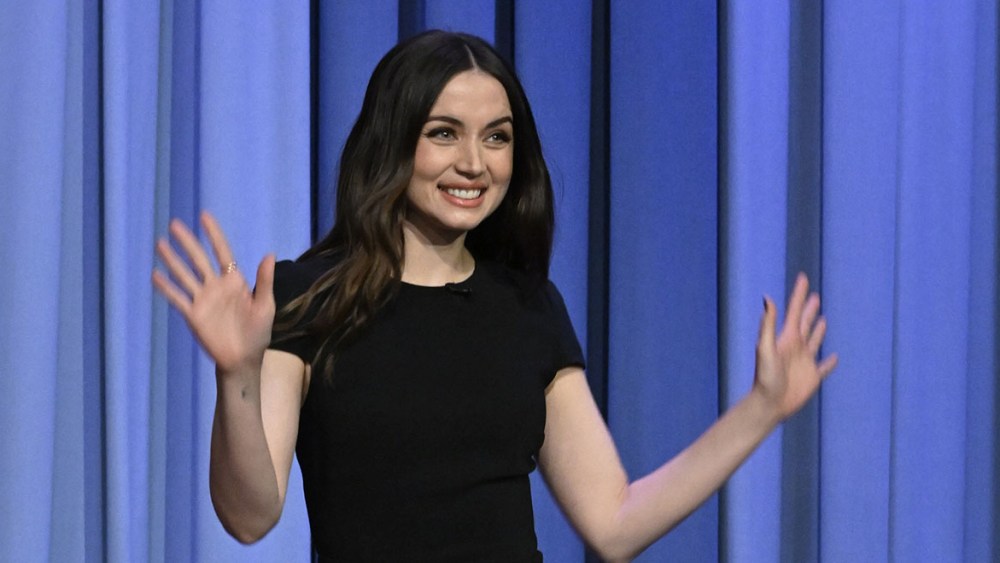 For her television segment, de Armas wore a black dress by Oscar de la Renta with a thigh-high slit and ruffle detail cascading from the waist.

The actress coordinated with rhinestone-encrusted strappy sandals from Gianvito Rossi. She accessorized with a single bejeweled ring from Leighton jewels.

For makeup, de Armas tapped Gita Bass, who gave the actress a soft pink lip and eye-popping eye makeup, including heavy mascara and eye shadow. Hairstylist Lona Vigi gave her a middle part down the center and a wavy style.

During her segment the actress discussed her favorite ice cream flavor, how she was terrified to play Marilyn Monroe in Netflix’s “Blonde” and her upcoming film “Ballerina” with Keanu Reeves. De Armas also played the three-word movie game with Jimmy Fallon as they tried to get each other to guess the titles of movies using only three words.

The Tuesday episode of “The Tonight Show Starring Jimmy Fallon” also featured a segment with actor Luke Grimes, who is starring in the hit Paramount Network series “Yellowstone.”

Like de Armas, Grimes took a minimalist approach to color for dressing, opting for a black shirt, black trousers and black boots paired with a chocolate brown blazer. Grimes discussed releasing his first country music single and traveling cross-country with his wife.

The episode also featured a performance by musician Protoje.