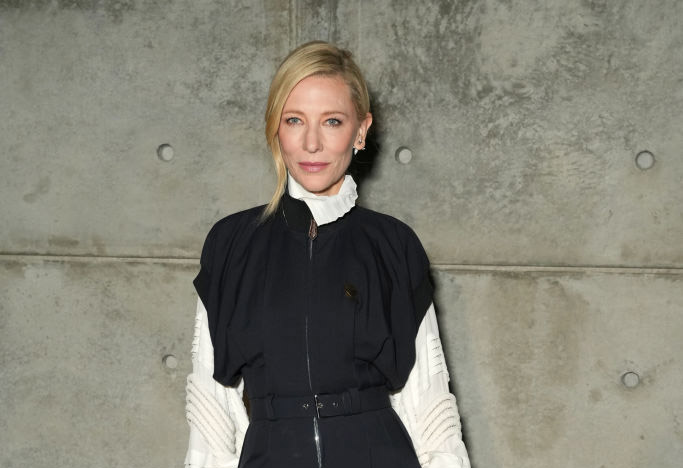 For the occasion, the actress wore a black zip-up belted jumpsuit with a white shirt underneath featuring an asymmetrical ruffle collar and voluminous ruffle sleeves, pairing the look with pointy-toe black booties. Blanchett’s look was archival Louis Vuitton. She accessorized with subtle earrings.

Blanchett has been a known supporter of Louis Vuitton since 2012 when she attended a store opening for the brand in Rome. Last year, she also attended the LVMH Prize for Young Designers ceremony, where she awarded the prize to Steven Stokey-Daley of S.S. Daley.

For makeup, Blanchett worked with Mary Greenwell to create an evening-ready look featuring a glossy pink lip, rose pink blush, mascara and pink eye shadow. For hair, Blanchett worked with Robert Vetica, who pinned her hair in the back, parted it to one side and gave the actress a single bang cascading to the side of her face.

Blanchett is nominated for the Golden Globe Award for Best Actress in a Motion Picture — Drama for her role in “Tár” as Lydia Tár. The film tells the story of the downfall of a fictional composer and conductor.

W Magazine and Louis Vuitton’s dinner was hosted by W editor in chief Sara Moonves and Louis Vuitton artistic director Nicolas Ghesquière. The dinner brought together stars from the worlds of film and television, many of whom are nominees and front runners for tomorrow’s Golden Globe Awards and the upcoming Academy Award nominations.