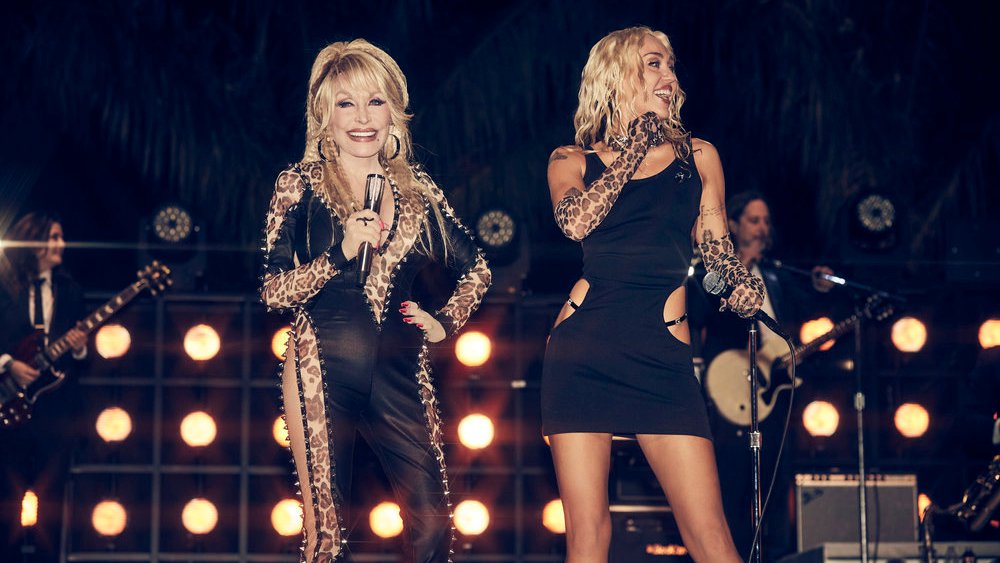 To ring in the New Year the singer joined her goddaughter Miley Cyrus as a cohost of her annual New Year’s Eve special. The night revealed some powerhouse performances from the duo, but also showcased Parton’s signature style.

Here’s a roundup of Parton’s standout looks from the evening special.

To kick off the live event, Parton and Cyrus did a cover of Joan Jett & the Blackhearts’ “I Love Rock ‘n’ Roll.” Parton channeled her inner animal, wearing a leopard-print jumpsuit with a plunging neckline and cutouts on the sides of her legs. Adding an edgy touch to her animal-elevated look, her jumpsuit was adorned with silver studs along her arms, legs and chest. To accessorize, the country singer wore a dazzling pair of hoop earrings. She coordinated with Cyrus, who wore a Little Black Dress with elbow-length leopard-print gloves.

Just before ringing in the New Year at midnight, Parton and Cyrus did a memorable mashup performance of their two greatest hits: Parton’s “I Will Always Love You” and Cyrus’s “Wrecking Ball.” For the nostalgic ballad, Parton shimmered in an alluring white gown. The dress, with shimmering pearls throughout, had sheer paneling along her arms, legs and bodice. The details included coordinating parallel panels of white sequins and sheer flesh-toned fabric along her skirt and a geometric designed pattern along her chest.

While rehearsing for the New Year’s Eve special, Parton wore an edgy all-black ensemble. Her top had a large cutout on her chest and was flared on the bottom. To complete her look, she wore a pair of shiny black sculpted pants with fishnet-keyhole detailing on her hips. For accessories, Parton wore a gold band, a silver statement bracelet and sunglasses.

In the promotional photos for the NBC special, Parton and Cyrus coordinated in fitted dresses. Parton wore a long-sleeve gold sequined dress with square patterns throughout. The dress had black boarding along her waist, neckline and shoulders, which had cutouts. She slipped into a pair of platform bronze-colored heels with a clear toe. For makeup, Parton embraced a glamorous party look, with smoky eye shadow and a nude-pink lip.

“Miley’s New Year’s Eve Party” premiered live on NBC on Dec. 31. The event included performances by Sia, Latto, Rae Sremmurd and Fletcher. This is the second installment of Cyrus’s New Year’s Eve special, which she tapped comedian Pete Davidson as a cohost in 2022.