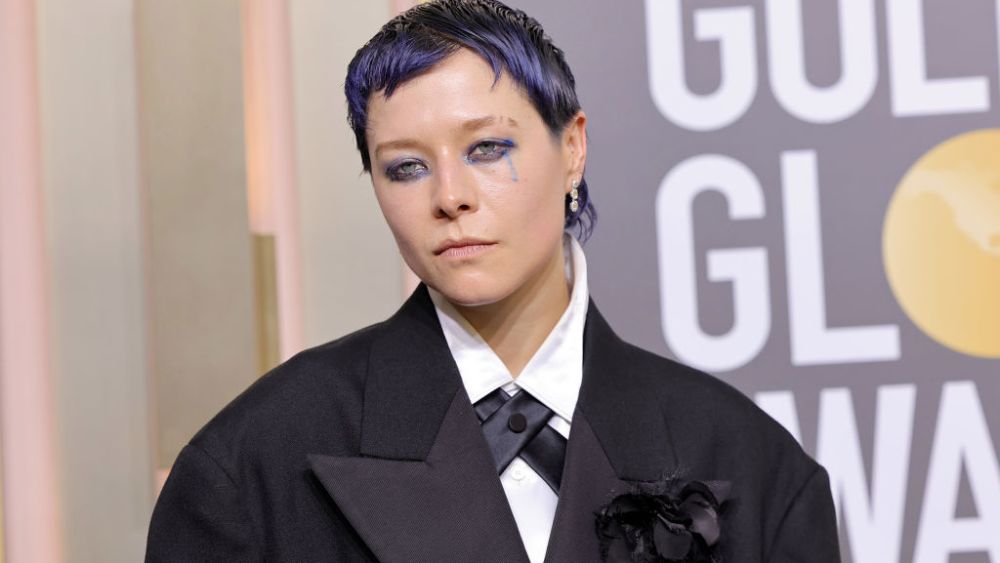 Emma D’Arcy made a standout arrival to the 2023 Golden Globes on Tuesday in Beverly Hills. To the red carpet, they arrived in an Acne Studios ensemble.

D’Arcy’s suit featured an oversize two-lapel blazer, adorned with a huge fabric flower. Underneath, they wore a white button-up top with a crisscross black tie. The rest of D’Arcy’s outfit consisted of a pair of black trousers and a black shirt layered around their waist, giving off the look of a skirt. The outfit was tied together with a pair of dazzling bright blue gloves by Paula Rowan, which added a stark contrast to the all-black look. For their awards show look, D’Arcy worked with celebrity stylist Rose Forde, who is represented by The Wall Group.

To coordinate with their outfit, D’Arcy wore a pair of Paris Texas Holly Mama Crystal-Embellished Suede Ankle Boots, which had a short, skinny heel and a pointy toe. When it came to hair, D’Arcy did not disappoint, wowing many by dyeing their hair an electric blue that complemented their shiny gloves. They wore their hair in a comb-over style, but with sharp edges for an edgy look.

It was a big night for D’Arcy, as the show they star in, “House of the Dragon,” won a Golden Globe for Best Drama Series. D’Arcy stars in the show alongside Amelia Alcock, Matt Smith and Olivia Cooke. The series serves as a prequel to “Game of Thrones.”

The 2023 Golden Globe Awards honors outstanding performances and work in film and television. The ceremony was hosted by actor and comedian Jerrod Carmichael.