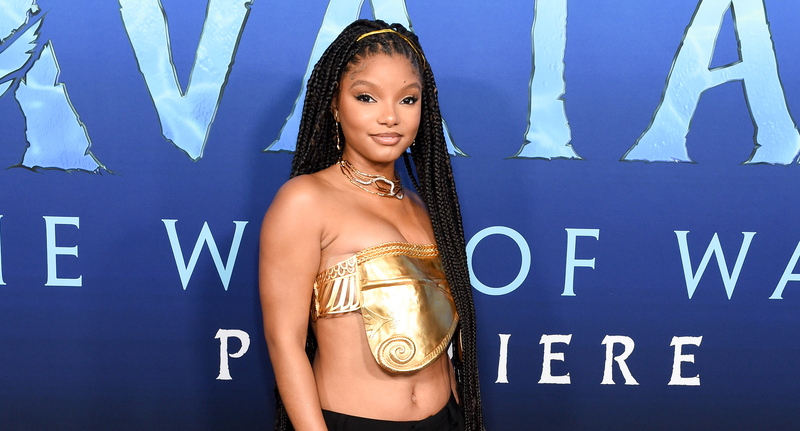 Halle Bailey made a regal arrival to the “Avatar: The Way of Water” U.S. premiere in Los Angeles on Monday. Bailey arrived on the red carpet in a Balmain look.

Bailey’s gold-plated bustier was strapless and form-fitting. The piece came from Balmain’s resort 2023 collection, which drew inspiration from ancient Egyptian history, referencing Cleopatra, the Eye of Horus, the wings of the goddess Nekhbet and other symbols.

The top was crafted in collaboration with the Egyptian fine jewelry design house Azza Fahmy. She coordinated her look with a pair of black straight-leg pants, also from Balmain.

For accessories, Bailey embraced the gold theme, with a wraparound gold-colored choker and a pair of dangly earrings. She wore jewelry from Alexis Bittar and Mara Paris.

To complete her royal ensemble, Bailey slipped into a pair of Alexander McQueen heels, also adorned with gold-colored detail on the toe. Her hair was styled into long knotless braids, which were pushed back with a thin, gold-colored headband.

Bailey was styled by Nichole Goodman, who has recently put together a number of her recent looks.

When it came to makeup, Bailey channeled the look of an Egyptian goddess, with sharp black eyeliner, a touch of gold-colored smoky eye shadow and a matte nude lip.

Bailey was joined at the movie premiere by other stars, including Heidi Klum, The Weekend, Daveed Diggs and H.E.R.

The singer is gearing up for a highly anticipated movie premiere of her own, Disney’s live-action remake of “The Little Mermaid,” in which she stars as princess Ariel.