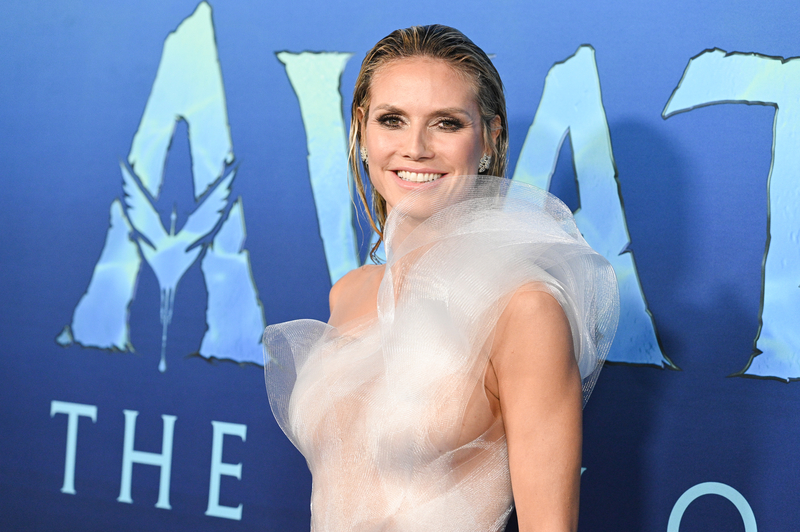 Heidi Klum made an ethereal arrival at the “Avatar: The Way of Water” U.S. movie premiere in Los Angeles on Monday. Klum wore a sheer white gown by Lever Couture for the soirée.

Her one-shoulder gown was adorned with a wispy fabric, creating an airy illusion with a warped effect. The dress, securely fitted to Klum‘s body, also included a thigh-high slit and a sheer material that created a small train.

Klum accessorized with a pair of dazzling statement earrings. For shoes, she kept all the attention on her dress, slipping into a pair of clear open-toed heels. Klum is usually styled by Rob Zangardi and Mariel Haenn, who have also worked with Jennifer Lopez, Cara Delevingne, Camila Cabello and Gwen Stefani.

When it came to hair, Klum embraced a wet look, with her hair slicked back and left down. Her makeup included smokey eye shadow, a shiny pink lip and black eyeliner.

Other stars attended the movie premiere, including the film’s cast Zoe Saldaña, Sam Worthington and Sigourney Weaver. More A-list stars at the premiere included The Weeknd, Halle Bailey and H.E.R.

The supermodel constantly wows many with her standout fashion looks. Klum began her career modeling for Victoria’s Secret, “Sports Illustrated” and Givenchy. For the past decade, she’s been focusing on the television world, working as a judge on shows like “Project Runway,” “German’s Next Top Model,” “Making the Cut” and “America’s Got Talent.”

Klum is also known in the fashion realm for her intricate Halloween costume transformations. In the past, she has dressed up as Fiona from the 2001 film “Shrek,” to a version of herself as an elderly woman. For Halloween this year, Klum reprised her infamous annual Halloween extravaganza after taking a hiatus for two years. Her costume this year involved her transforming into a full-size, ultra-realistic earthworm.

“Avatar: The Way of Water” debuts in theaters on Friday.