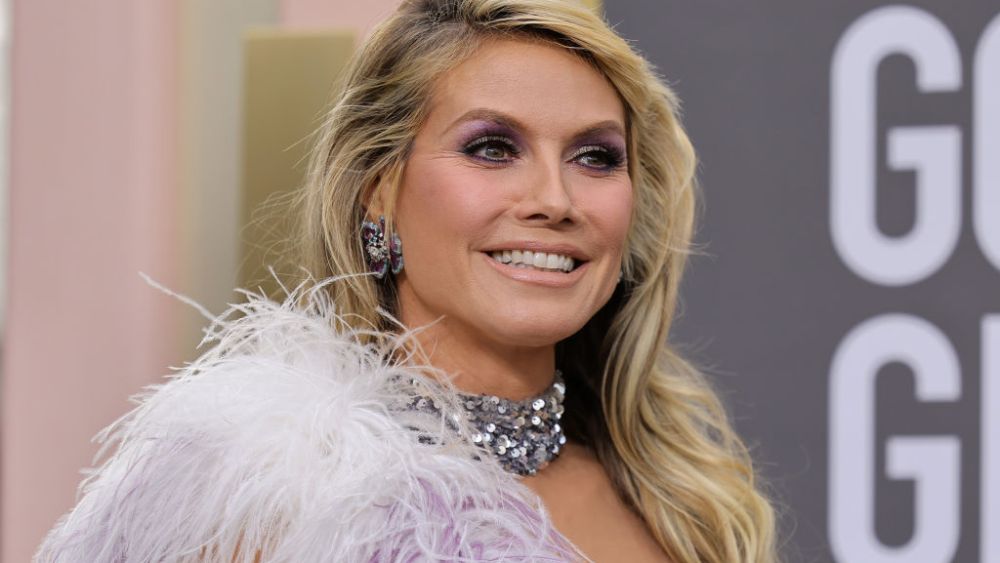 Heidi Klum made a stunning arrival to the 2023 Golden Globes on Tuesday in Los Angeles. For the awards show, Klum arrived on the red carpet in a sequined minidress with a boa attachment.

Klum’s dress from Kevin Germanier’s spring 2023 ready-to-wear collection had a plunging sweetheart neckline with flesh-colored detail throughout. It had a silver colored sequin adornment around her neck, giving the dress a mock neckline effect. The most striking part of Klum’s gown was a pink and purple colored, textured, feather boa-like attachment over her shoulder and across her bodice.

She coordinated the rest of her awards show look with a pair of silver colored open-toed stiletto heels. For hair she went for big, with her signature blonde hair being in glamorous, heightened curls. For makeup, Klum opted for a TV-ready look, with smoky gray eye shadow, bright pink blush and a light pink glossy lip.

The personality and model arrived at the awards show alongside her husband, Tom Kaulitz, who coordinated with his wife in a classic tuxedo. A slew of other A-list stars joined the red carpet for the awards, including Jamie Lee Curtis, composer Chloe Flower and Laverne Cox.

The 2023 Golden Globe Awards honors outstanding performances and work in film and television. This year, Variety is hosting the preshow as an official partner with the Hollywood Foreign Press Association. The ceremony is hosted by actor and comedian Jerrod Carmichael. Some of the nominees include Austin Butler, Cate Blanchett, Daniel Craig, Michelle Yeoh, Brad Pitt, Angela Bassett, James Cameron and Zendaya. Eddie Murphy will receive the Cecil B. DeMille Award and Ryan Murphy will receive the Carol Burnett Award.