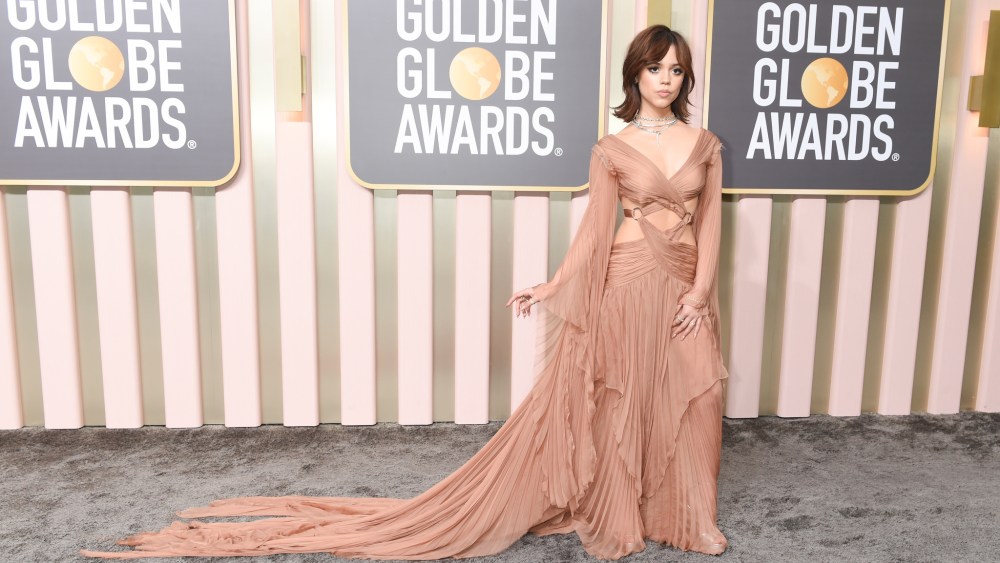 Jenna Ortega arrived on the red carpet for the 2023 Golden Globe Awards on Jan. 10 in Beverly Hills, in a gown with a Grecian vibe.

In honor of this year’s ceremony, Ortega wore a blush-colored long-sleeved cutout dress with a substantial train from Gucci. She accessorized the look with jewelry from Tiffany & Co., including layered diamond and floral necklaces and numerous rings. She finished the look with metallic platform sandals from Jimmy Choo.

To create her look for this year’s ceremony, Ortega worked with Enrique Melendez, who has been dressing Ortega since she began her press tour for her hit Netflix series “Wednesday,” which premiered on the streaming service in November. Melendez has previously dressed the actress in Courrèges, Versace and Thom Browne.

Within three weeks of the release of “Wednesday” on Netflix, it became the streaming service’s second most watched English language series. Ortega is nominated at Tuesday’s Golden Globe Awards for Best Actress in a Television Series — Musical or Comedy for her role in the show as the title character.

“Wednesday” not only managed to capture a wide audience of Netflix viewers but also went viral for a dance moment featuring Ortega wearing an Alaïa dress. The show is based on the Addams Family comics, and lead costume designer Colleen Atwood worked to reimagine the female characters through a modern lens.

The 2023 Golden Globe Awards honors outstanding performances and work in film and television. This year, Variety, which is also owned by WWD’s parent company PMC, is hosting the pre-show as an official partner with the Hollywood Foreign Press Association. The ceremony, held Jan. 10 in Los Angeles, is hosted by actor and comedian Jerrod Carmichael. Some of the nominees include Austin Butler, Cate Blanchett, Daniel Craig, Michelle Yeoh, Brad Pitt, Angela Bassett, James Cameron and Zendaya. Eddie Murphy will receive the Cecil B. DeMille Award and Ryan Murphy will receive the Carol Burnett Award.