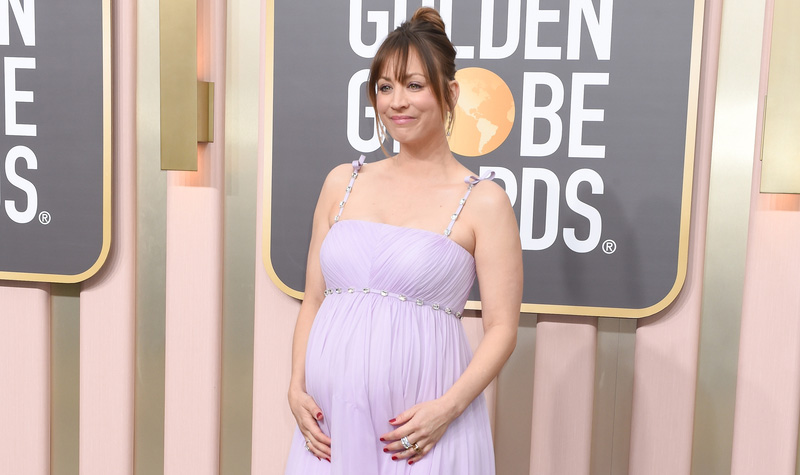 Kaley Cuoco happily bumped along while arriving at the 2023 Golden Globes on Tuesday in Beverly Hills, but not without wearing a stunning look. The actress, who was nominated for a Golden Globe Award, wore a lavender gown by Vera Wang.

Cuoco’s gown featured a draped print throughout and a square neckline. The straps were adorned with shimmering square details and had bows on her shoulders. The gown also had a matching belt detail around Coco’s waist, adorning her growing baby bump.

She wore hair in a sleek high bun, with a frayed straight bang that framed her face. When it came to makeup, Cuoco glowed in light pink eye shadow, bright blush and a matte pink lip. She attended the red carpet with her boyfriend, father-to-be Tom Pelphrey. Pelphrey went all white for his look, wearing a white blazer, button-up shirt and a stark black bow tie.

Cuoco was nominated at this year’s Golden Globes in the category of Best Actress in a Musical/Comedy for her role in “The Flight Attendant.” The HBO series centers around a murder mystery, when a flight attendant wakes up in a hotel room next to a dead man, with no memory of what happened. Cuoco stars in the show with Michelle Gomez and Rosie Perez.

The 2023 Golden Globe Awards honors outstanding performances and work in film and television. This year, Variety is hosting the pre-show as an official partner with the Hollywood Foreign Press Association. The ceremony, held Tuesday, is hosted by actor and comedian Jerrod Carmichael. Some of the nominees include Austin Butler, Cate Blanchett, Daniel Craig, Michelle Yeoh, Brad Pitt, Angela Bassett, James Cameron and Zendaya. Eddie Murphy will receive the Cecil B. DeMille Award and Ryan Murphy will receive the Carol Burnett Award.