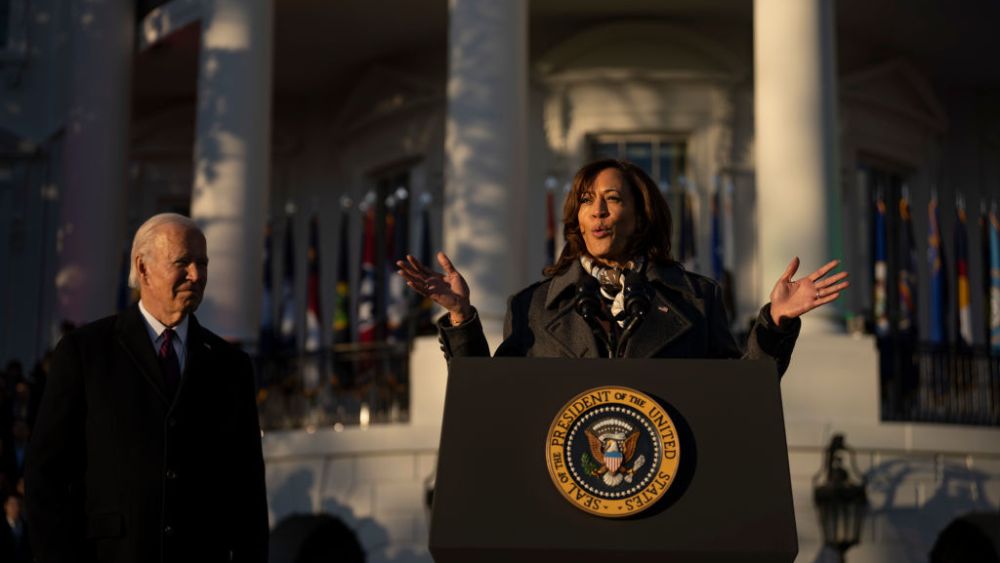 Vice President Kamala Harris arrived on the White House Lawn on Tuesday to witness the historic signing of the Respect for Marriage Act.

For the moment in LGBTQ rights, Harris was winter-ready in a charcoal gray coat with a notch lapel and wide collar. She accessorized the look with black leather gloves and a white and brown patterned scarf.

Harris was beaming as she applauded the signing of the legislation. She celebrated alongside her former members of the Senate and congresswomen as President Joe Biden signed the bill.

Harris’ track record for supporting LGBTQ rights goes back years. During her days as a district attorney for San Francisco, she established a unit to investigate and prosecute anti-LGBTQ violence. As the junior U.S. senator from California, she also introduced a bill to end the use of the gay and transgender panic defense and marched in the San Francisco Pride Parade in a rainbow and crystal-embellished jacket to voice her support for the LGBTQ community.

The vice president recently had a statement style moment during the White House State Dinner for French President Emmanuel Macron. For the occasion, she wore a black Vera Wang gown and opera gloves.

The Respect for Marriage Act signed by Biden provides federal recognition of same-sex marriages and interracial marriages. The bill was proposed out of concern that the Supreme Court would strike down the legal protections for such relationships. Biden was also joined at the signing ceremony for the Respect for Marriage Act by Senate Majority Leader Chuck Schumer, outgoing Speaker of the House Nancy Pelosi, and First Lady Jill Biden.