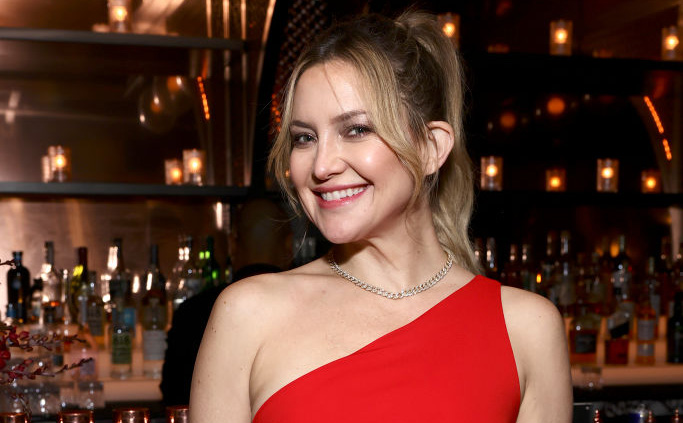 Kate Hudson attended the Netflix Golden Globe and Critics Choice Nominee Toast on Sunday in Los Angeles in a vibrant look. For the occasion, the actress wore a red Michael Kors Collection gown from the designer’s spring 2023 ready-to-wear collection.

Hudson’s one-shoulder gown had accented cutouts on the each side of her hips, one crescent-shaped and one acute shaped. It also had a thigh high slit on one leg and a billowing skirt.

Her accessories included a chain link necklace and a dazzling bracelet. She toted a gold-colored handheld clutch. Hudson worked with longtime stylist Sophie Lopez for her the streaming service’s pre-award show party. Lopez has outfitted Ella Purnell and Ashley Madekwe.

Hudson wore her hair in a mid-high ponytail with two pieces of her hair left out to frame her face, doubling as long bangs. Her nails were painted into a chic French-tip style, with an almond shape.

Hudson joined a slew of A-listers to the Netflix event, which included Keegan-Michael Key, Emma Myers, Niecy Nash, Jenna Ortega and Rita Ora. The event celebrated the Netflix pieces of work that have been nominated for the two upcoming award shows, including the film “Glass Onion: A Knives Out Mystery.” Hudson stars in the Netflix film, which was nominated for a Golden Globe in the Best Picture- Musical/Comedy category.

Along with acting, Hudson never misses a moment to showcase her standout style. In December, to the “Tonight Show Starring Jimmy Fallon,” she wore a glittery Chrome Hearts Couture two-piece skirt set. Out of all of her press tour looks for the “Glass Onion: A Knives Out Mystery” film, one of Hudson’s most dazzling outfits was at the film’s Los Angeles premiere. She wore a sequin-embellished Elie Saab gown with a mock neckline.