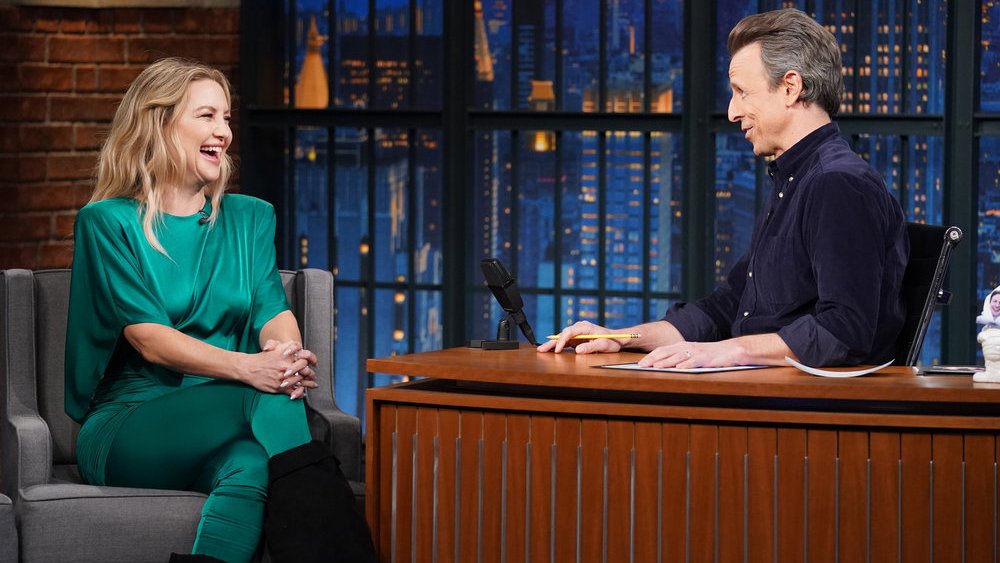 The details of the two-piece set included a mid-sleeve-length tunic with draping throughout and a pair of slim-fitting pants. The tunic featured a sculpted skirt that had an intense ruching effect.

When it came to accessories, she wore a few midi rings. Hudson worked with longtime celebrity stylist Sophie Lopez for her look. Her hair was styled into a middle part by Jacob Rozenberg, with wavy pieces of her highlighted-blonde tendrils framing her shoulders. Rozenberg has worked with Dove Cameron, Meghann Fahy and Ellen Pompeo.

For her makeup, she worked with artist Maud Laceppe, who gave her a glowy look, with a touch of rosy blush, highlighter and a light pink lip.

While on the show she talked about her movie “Glass Onion: A Knives Out Mystery,” her costar Kathryn Hahn and her family.

“I have to say, the first time I saw it [the film] was with the Toronto Film Festival audience of 1,500 people and I was really nervous but the second the movie started, that audience was just uproariously laughing, totally with it, totally engaged and it doesn’t happen very often. So I feel really lucky to be in it,” Hudson shared with host Seth Meyers about the film.

Hudson is continuing her press tour for the film, embracing it as an opportunity to showcase her standout style moments. In November, to the Los Angeles premiere of the film, Hudson wore an allover sequined mock neck Elie Saab gown with a dramatic train and long attachments on the sleeves. For the movie’s Madrid premiere in October, Hudson wore a gown from Halpern’s spring 2023 collection, which featured a mermaid-style skirt with a top that mimicked a seashell bra.

Directed by Rian Johnson, the film is the second installment of the “Knives Out” franchise, which released its first film in 2019. “Glass Onion: A Knives Out Mystery” comes to Netflix on Dec. 23. Along with Hudson, the cast includes Janelle Monáe, Daniel Craig and Kathryn Hahn.