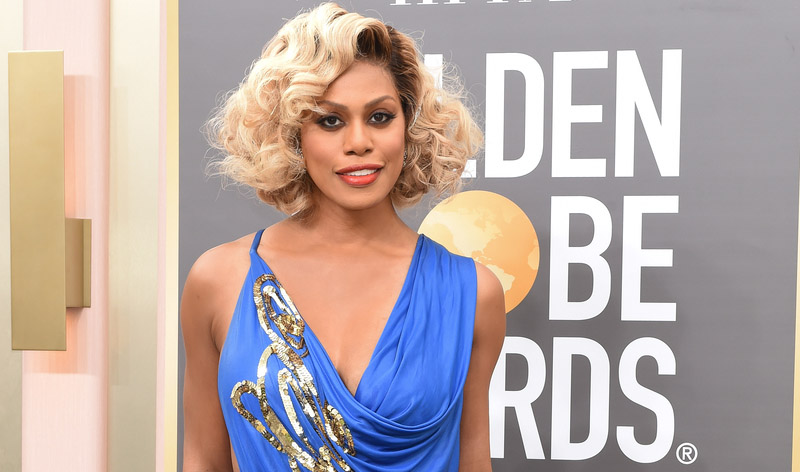 Laverne Cox arrived on the red carpet for the 2023 Golden Globe Awards in Los Angeles on Jan. 10, wearing a statement-making dress.

In honor of this year’s ceremony, the actress walked the red carpet in a blue leaf-pattern embroidered dress with a train and draping Grecian-style bodice from John Galliano’s spring 2007 collection for his eponymous label. She coordinated the look with satin blue shoe. Cox accessorized by dripping in diamonds from Fred Leighton and Kwiat Jewels, including a diamond and platinum leaf brooch worn in her hair, diamond earrings, two diamond bracelets and two diamond rings from Leighton and a diamond ring from Kwiat.

For makeup, Cox went for an evening-ready look featuring a ruby red lip, a subtle touch of blush to accent her cheeks, smoky eye shadow and eye-popping mascara. For hair, Cox opted for a Marilyn Monroe-inspired look going for a short blonde cut with voluminous curls. Her nails were manicured with light blue tips to complement her dress.

In 2022, Cox became the host of her own television show “If We’re Being Honest With Laverne Cox,” where she interviewed influential celebrities and discussed their stories of adversity and how they arrived at success.

The 2023 Golden Globe Awards honors outstanding performances and work in film and television. This year, Variety, which is also owned by WWD parent company PMC, is hosting the preshow as an official partner with the Hollywood Foreign Press Association. The ceremony, held Jan. 10 in Los Angeles, is hosted by actor and comedian Jerrod Carmichael. Some of the nominees include Austin Butler, Cate Blanchett, Daniel Craig, Michelle Yeoh, Brad Pitt, Angela Bassett, James Cameron and Zendaya. Eddie Murphy will receive the Cecil B. DeMille Award and Ryan Murphy will receive the Carol Burnett Award.