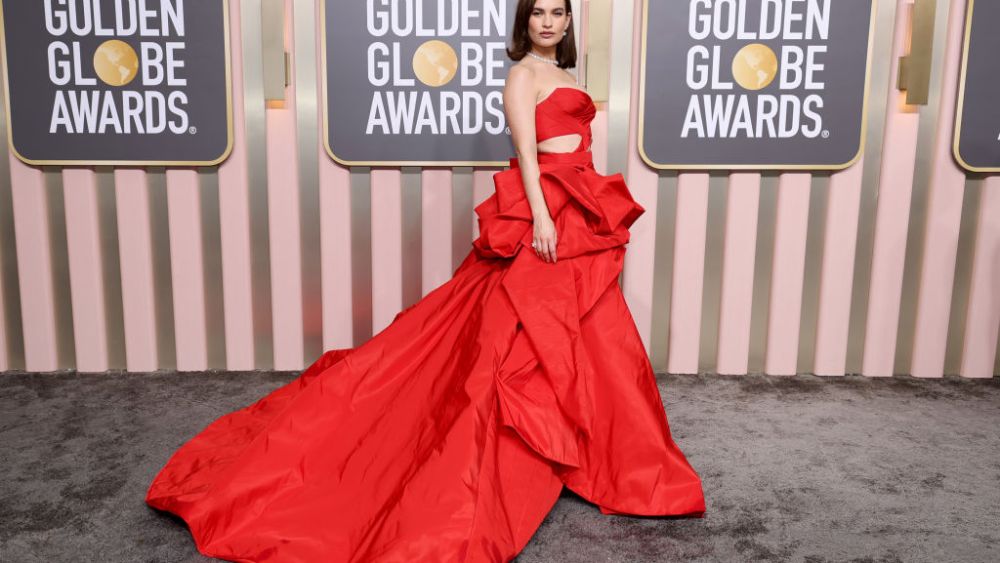 Lily James made a flaming-hot arrival to the 2023 Golden Globes on Jan. 10 in Beverly Hills, California. To the red carpet, wore a fiery-red gown by Atelier Versace.

The custom strapless gown included a square bustier-style neckline, with a criss-cross, cutout detail in the center of her bodice. The skirt mimicked a voluminous rose, with dramatic draping and tapered structure that formed a bulb-like pool around her waist.

Her accessories included a pair of dazzling earrings and choker necklace. She wore her hair styled straight into a sleek side part. For makeup, the actress opted for a glamorous look, with a dark burgundy matte lip, a touch of smokey eyeshadow and defined brows.

James arrived on the red carpet among a slew of other A-list stars, including Margot Robbie, Ana de Armas and Selena Gomez. James was nominated for Best Performance by an Actress in a Limited Series for her role as Pamela Anderson in the Hulu series “Pam and Tommy.”

The 2023 Golden Globe Awards honors outstanding performances and work in film and television. This year, Variety, which is owned by WWD’s parent company PMC, is hosting the pre-show as an official partner with the Hollywood Foreign Press Association. The ceremony, held Jan. 10 in Los Angeles, is hosted by actor and comedian Jerrod Carmichael. Some of the nominees include Austin Butler, Cate Blanchett, Daniel Craig, Michelle Yeoh, Brad Pitt, Angela Bassett, James Cameron and Zendaya. Eddie Murphy will receive the Cecil B. DeMille Award and Ryan Murphy will receive the Carol Burnett Award.