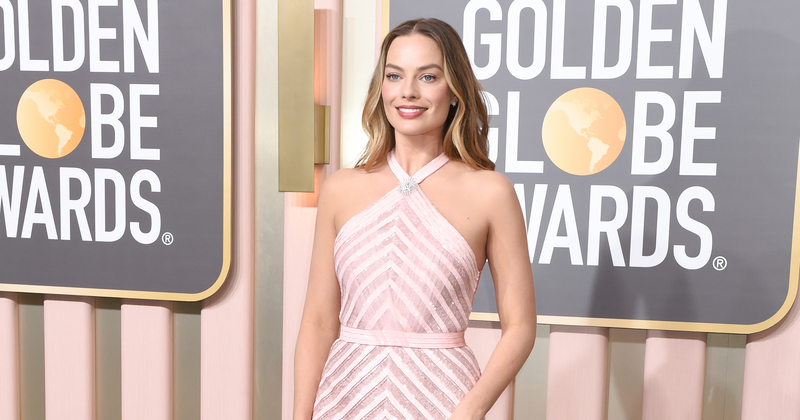 Margot Robbie arrived on the red carpet for the 2023 Golden Globe Awards on Tuesday in Beverly Hills, looking pretty in pink.

For this year’s awards ceremony, the actress wore a sparkling pink halter top dress with a chevron pattern and large fringe trims on the skirt from Chanel. The dress had a crystal brooch embellishment at the neckline. She accessorized with a diamond ring.

Robbie signed with Chanel as a brand ambassador in 2018, first appearing in a campaign for the Coco Neige line photographed by Chanel’s former artistic director, the late Karl Lagerfeld.

For makeup, Robbie worked with Chanel makeup artist Pati Dubroff to create a complementary look featuring a blush red lip, a touch of rose blush on her cheeks and light pink eye shadow. For hair, she worked with Bryce Scarlett, who parted her hair down the center and did it in glossy waves.

Robbie was nominated at Tuesday night’s Golden Globe Awards for Best Actress in a Motion Picture – Musical or Comedy for her role in “Babylon” starring opposite Brad Pitt. The award ultimately went to Michelle Yeoh for “Everything Everywhere All at Once.”

Robbie will star as the title character in the highly anticipated “Barbie” film arriving in theaters this July.