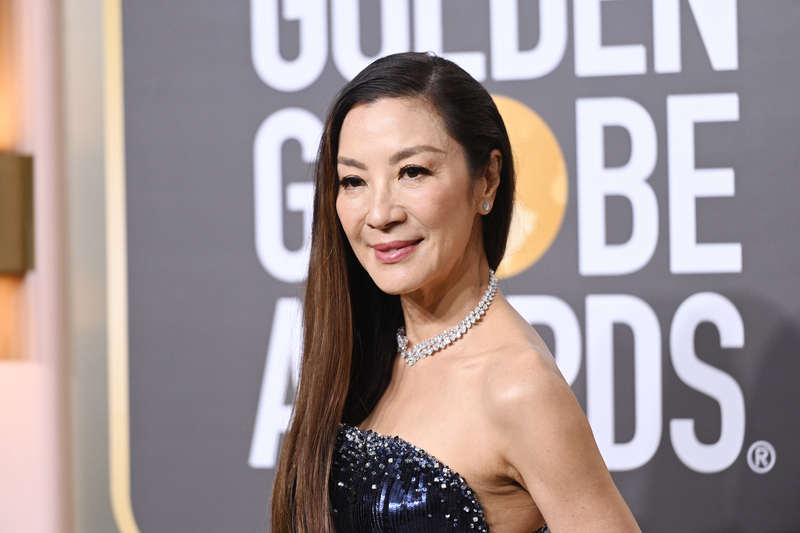 Michelle Yeoh made a glittery arrival to the 2023 Golden Globes on Jan. 10 in Beverly Hills, California. Arriving on the red carpet, Yeoh looked to Armani Privé, wearing a couture midnight blue strapless gown embellished with gradient crystals and sequins.

Yeoh’s gown consisted of a form-fitting bodice with a two-tier skirt. The first tier had two levels of dramatic ruffles, and the longer skirt was complete with a floor-length silhouette.

Yeoh’s accessories included a floral-detail choker necklace, an oversized stacked bracelet and a shimmering statement ring. Her hair was styled straight and parted to the side.

Yeoh received her first-ever Golden Globe during the ceremony, securing the title of Best Actress in a Motion Picture, Musical or Comedy category, for her role in the film “Everything Everywhere All At Once.” She stars in the film alongside Ke Huy Quan, Jamie Lee Curtis and Stephanie Hsu.

The 2023 Golden Globe Awards honors outstanding performances and work in film and television. This year, Variety, which is also owned by WWD parent company PMC, is hosting the pre-show as an official partner with the Hollywood Foreign Press Association. The ceremony, held Jan. 10 in Los Angeles, is hosted by actor and comedian Jerrod Carmichael. Some of the nominees include Austin Butler, Cate Blanchett, Daniel Craig, Michelle Yeoh, Brad Pitt, Angela Bassett, James Cameron and Zendaya. Eddie Murphy will receive the Cecil B. DeMille Award and Ryan Murphy will receive the Carol Burnett Award.