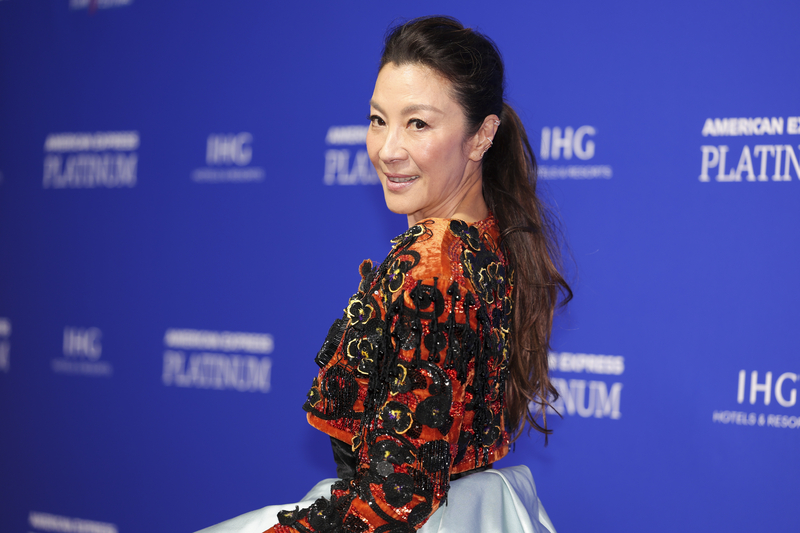 Michelle Yeoh made a striking arrival to the 2023 Palm Springs International Film Awards on Thursday in Palm Springs, California. Yeoh arrived on the red carpet in a deconstructed gown from Schiaparelli‘s fall 2022 couture collection.

Yeoh’s dress consisted of a uniquely embroidered scoop neck, long-sleeve top, a black sculpting bodice-piece and a sculpted baby blue skirt. Her detailed orange top with green accents mimicked the jacket of a matador, with dramatic shoulder pads. The skirt almost looked like a rose, with sculpted drapery fabric throughout.

The dress by Daniel Roseberry debuted on the runway last July at Musée des Arts Décoratifs in Paris during the opening of the exhibit “Shocking! The Surreal World of Elsa Schiaparelli.” The collection was a tribute to the house’s founder.

She finished off her artistic look with a pair of black Wolford tights.

Yeoh worked with stylist Jordan Johnson Chung for her red carpet look. Chung’s celebrity clientele includes Kiernan Shipka, Kathryn Hahn and Sandra Oh. When it came to makeup, Yeoh kept it very minimal, keeping the attention on her dazzling couture dress. She paired her standout look with a pair of ultra-high black heels with a dainty ankle strap.

Yeoh was one of the many A-list stars at the film awards, walking the red carpet along with Viola Davis, Michelle Williams, Cate Blanchett and Austin Butler, to name a few. The Palm Springs International Film Awards announced that Yeoh is a 2023 honoree and the recipient of the International Star Award for her work in the March 2022 blockbuster, “Everything Everywhere All At Once.”

Yeoh stars in the film alongside Stephanie Hsu, Ke Huy Quan and Jamie Lee Curtis. With awards season kicking back into gear, the film has received a lot of nominations. Just last month, it was announced that Yeoh was nominated for a 2023 Golden Globe for best actress in a motion picture musical or comedy.