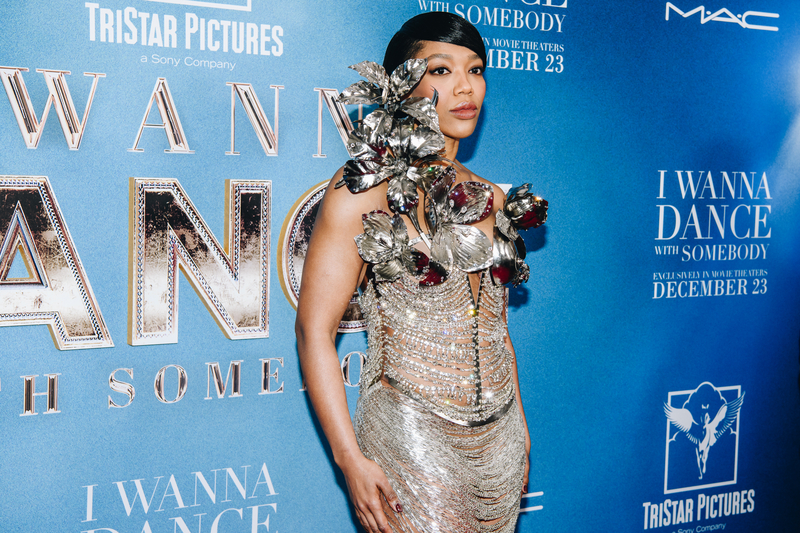 Naomi Ackie arrived at the Whitney Houston biopic “I Wanna Dance With Somebody” world premiere on Wednesday in New York City in a striking fashion look. She wore a Schiaparelli gown embellished with Swarovski crystals.

The Schiaparelli crystal-covered couture gown was by the brand’s creative director, Daniel Roseberry. The dress is comprised of 21,950 Swarovski crystals and 212,500 silver glass bugle beads that took 4,900 hours to make.

It had large floral accent on the sleeves, including multiple flowers on Ackie’s shoulder. The rest of the gown consisted of a plunging neckline and chain-like strands of Swarovski crystals framing the bodice, creating a see-through effect.

Ackie was styled by Nicky Yates, who has outfitted her in Alessandra Rich, Claire Foy and Phoebe Dynevor.

Ackie was joined on the red carpet movie premiere by her costars, which included Stanley Tucci, Tamara Tunie and Nafessa Williams.

Ackie plays Houston in the film, which showcases the emotional story about the late singer’s life, rise to fame and unforgettable voice.

Directed by Kasi Lemmons, the film is produced by Pat Houston, Whitney’s manager and sister-in-law, along with record chairman Clive Davis, who signed Houston to Arista Records when she was 19 years old.

Just this month, Whitney Houston’s estate collaborated with MAC Cosmetics to release a limited-edition capsule collection, which drew inspiration from the singer’s legendary moments. The makeup collection consisted of 11 products ranging from lipsticks and eye shadows to lashes that represented memorable moments throughout her career. In October, Houston’s estate, Primary Wave Music and Scent Beauty teamed up to release the Whitney Houston signature fragrance.

“I Wanna Dance With Somebody” releases in theaters on Dec. 23.