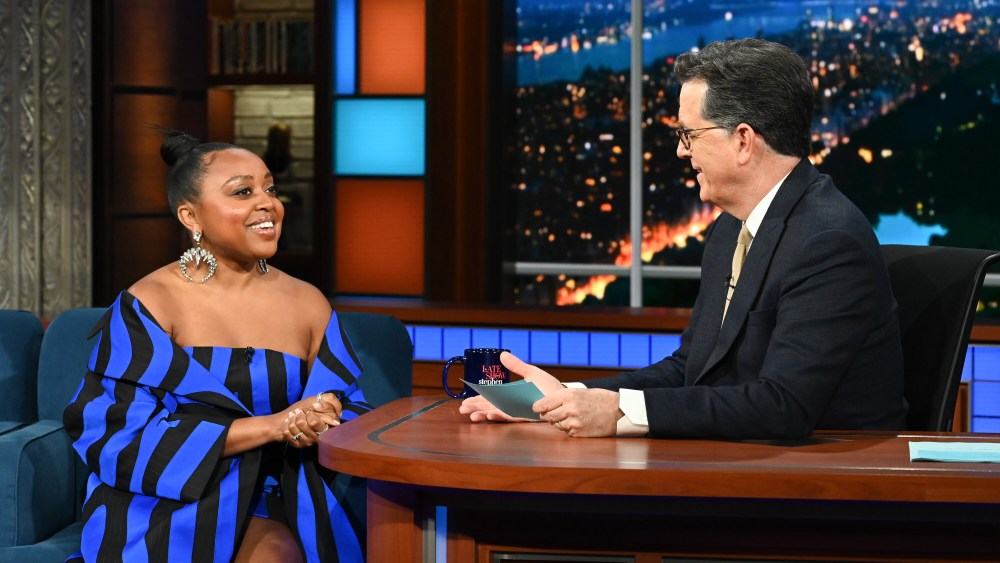 Quinta Brunson donned a fashion-forward look for her appearance on Tuesday’s episode of “The Late Show With Stephen Colbert.” For the occasion, the actress looked to Annakiki, wearing a dress and jacket combo from the brand’s summer 2023 collection.

Brunson wore a strapless, structured minidress that had architectural-inspired black stripes on a vibrant blue base. Overtop, she added an oversized matching jacket with a dramatic effect on the shoulders, adding a futuristic touch to her vibrant look.

Her accessories consisted of a pair of shimmering statement earrings by House of Emmanuele, a midi ring and a pair of black pointed-toe heels.

When it came to makeup, Brunson went for a deep-toned look, with smoky gray-like eye shadow, red-hued blush and a glossy lip. For hair, she worked with hairstylist Karen Miller, who took a fresh spin on a sleek high bun, by leaving some pointy pieces of Brunson’s hair sticking out.

On the late-night show, Brunson talked about growing up in Philadelphia, how successful 2022 was for her and her plans for the New Year.

Last month Brunson was nominated for a Golden Globe in the category of Best Performance by an Actress in a Television Series – Musical or Comedy.

Along with making waves in the television industry, Brunson never misses a moment to showcase her standout style. To the Critics Choice Association Celebration of Black Cinema & Television, the actress wore a black gown by Christian Siriano with a purple shawl-like adornment attached.