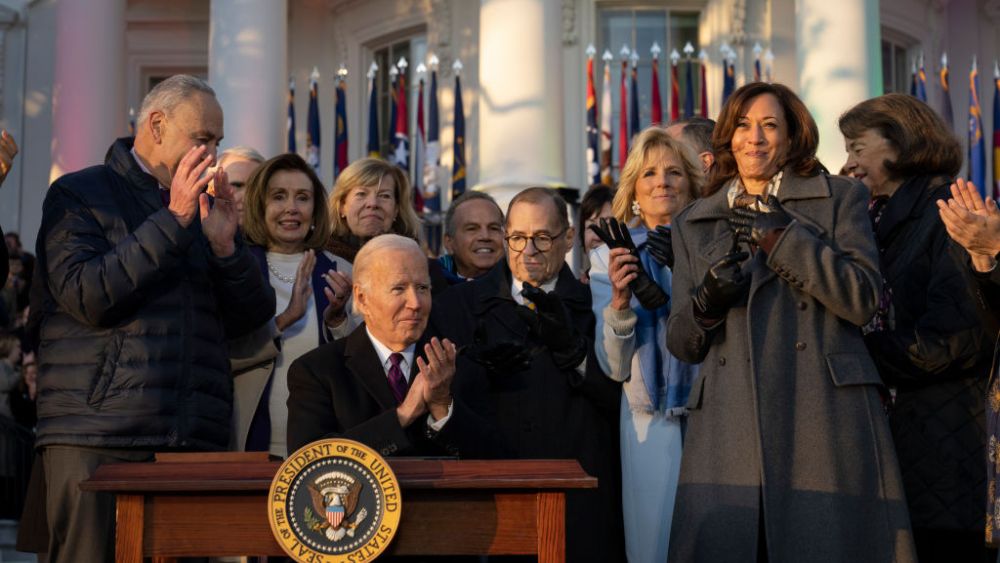 The stars of music, politics and “RuPaul’s Drag Race” came out to celebrate the historic signing of the Respect for Marriage Act at the White House on Tuesday.

Here, a look at some of the celebration’s highlights.

Longtime LGBTQ+ rights advocate Cyndi Lauper took to the White House Briefing Room to speak on the historic moment. Afterward, she performed one of her classic songs, “True Colors,” on the White House South Lawn with purple-dyed hair and a vibrant pink coat and houndstooth trousers.

Sam Smith joined their fellow musician Cyndi Lauper as part of the musical lineup for the signing. Smith donned pearl jewelry and performed their chart-topping hit “Stay With Me.”

“RuPaul’s Drag Race” star Shangela, who has appeared in multiple iterations of the franchise and “Dancing with the Stars,” donned a purple sequin dress and a pink and lilac coat as she posed with Vice President Kamala Harris for Instagram.

“RuPaul’s Drag Race” Season 12 contestant Brita Filter joined former New York City Council candidate Marti G. Cummings on the White House South Lawn as the two celebrated the signing. On Instagram, Cummings described them both as “drag artist[s] in politics.” In addition to being a drag performer, Brita is the national cochair of Drag Out The Vote, an organization dedicated to working with drag performers to promote democracy. Brita wore a ruched dress with embellished beads.

Vice President Kamala Harris stood alongside President Biden as he signed the bill. Harris looked cozy in a charcoal-gray coat and a white and brown scarf.

Jill Biden stood beside her husband as he signed the historic marriage equality bill. For the occasion, the first lady wore a monochromatic blue look, including a powder blue coat and an ocean blue scarf. She accessorized with a pair of statement earrings and kept her hands warm with black gloves.

Speaker of the House Nancy Pelosi

Congresswoman Nancy Pelosi, who has fought for LGBTQ+ rights since she first entered Congress in the ‘80s, joined her fellow politicians onstage as Biden signed the equal marriage rights legislation. Under Pelosi’s period as speaker of the House of Representatives, she delivered the votes necessary to pass the legislation.

Rainbows Light Up the White House

The White House also lit up with rainbow lights the night of the ceremony. This was last done in June of 2015 for Pride Month by President Obama.

The Respect for Marriage Act provides federal recognition of same-sex and interracial marriages. The bill was proposed out of concern that the Supreme Court would strike down the legal protections for such relationships.