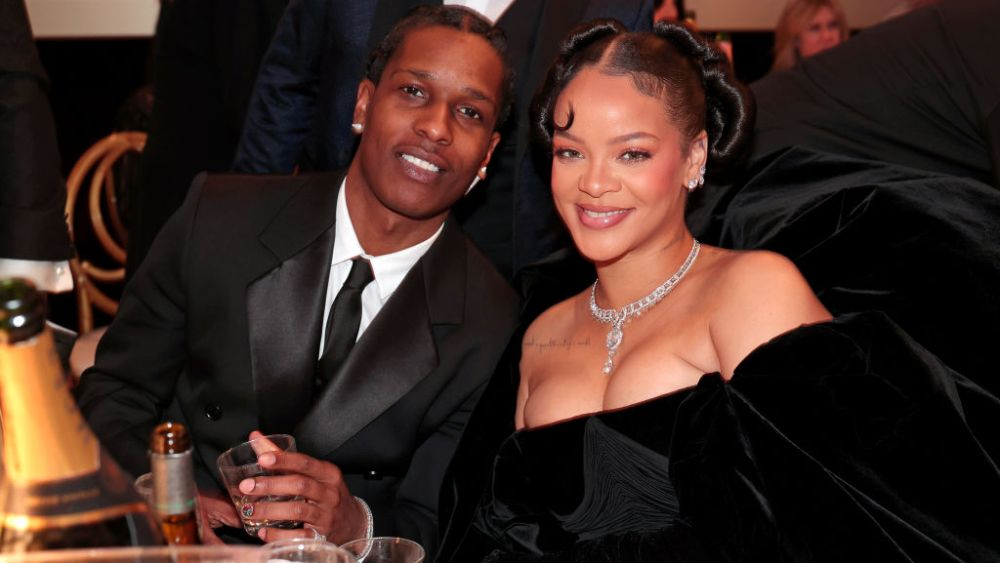 
Rihanna donned an all-black ensemble to the 2023 Golden Globe awards on Tuesday in Beverly Hills. The singer arrived at the event midshow in a black voluminous gown.

Rihanna’s classic Schiaparelli gown was off the shoulder and had a velvet look to it. It was floor-length, with a standout cape attached, which allowed the singer to float through the room. She coordinated her look with black Giuseppe Zanotti Intriigo Strap sandals and dazzling Cartier jewelry, including earrings and a Sixième Sens High Jewelry necklace.

For hair she took a chic spin on space buns, leaving a few pieces of her stark black hair out to frame her face.

The award-winning singer sat alongside A$AP Rocky, who charmed in a timeless suit with a black blazer and white button-up.

In the campaign photos, Rihanna can be seen posing in some of the pieces from the limited-edition 17-piece collection, which features a Rihanna sport-themed varsity jersey, beanies and hoodies. The collection, which is selling out already, even includes a special T-shirt that reads “Rihanna concert interrupted by a football game, weird but whatever,” with an image of the singer in a football helmet inside.

The 2023 Golden Globe Awards honors outstanding performances and work in film and television. This year, Variety is hosting the pre-show as an official partner with the Hollywood Foreign Press Association. The ceremony is hosted by actor and comedian Jerrod Carmichael. Some of the nominees include Austin Butler, Cate Blanchett, Daniel Craig, Michelle Yeoh, Brad Pitt, Angela Bassett, James Cameron and Zendaya. Eddie Murphy will receive the Cecil B. DeMille Award and Ryan Murphy will receive the Carol Burnett Award.