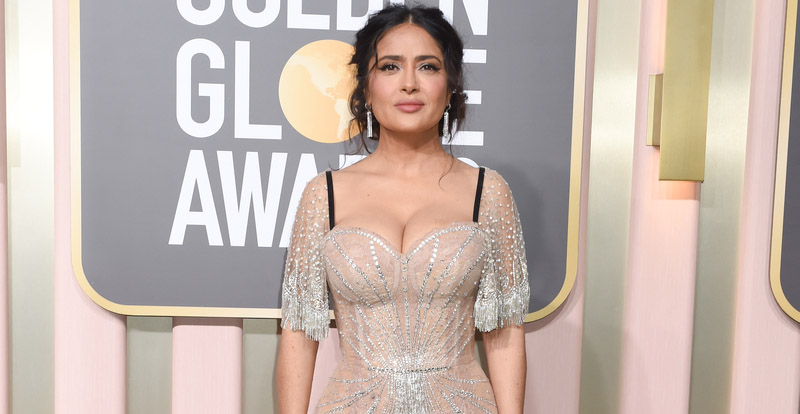 A slew of A-listers showed up to the carpet in sequins, including Heidi Klum, Salma Hayek, Angela Bassett and Michelle Yeoh.

The Golden Globes honor outstanding performances and work in film and television. This year, Variety, which is owned by the same parent company as WWD, hosted the pre-show as an official partner with the Hollywood Foreign Press Association.

Here is a roundup of all the times sequin looks appeared on the Golden Globes 2023 red carpet. Read on for more.

Heidi Klum brought playful glamour to the 2023 Golden Globes. Arriving on the red carpet, Klum wore a Germanier gown, which featured silver sequins throughout and a textured pink and purple feather boa. The brand’s gown was upcycled, and the model paired it with a pair of silver open-toe heels.

Angela Bassett went for a monochromatic sequin look, with a confetti sequin, mermaid-style gown with halter neck and side slit. The actress made history at the evening awards, becoming the first actor to win an award for a Marvel movie for her role in “Black Panther 2: Wakanda Forever.”

Jessica Chastain went for a geometric approach to her sequined look at the Golden Globes, wearing a Oscar de la Renta gown. The gown featured a spiderweb-like sequin pattern throughout, starting from the circular epicenter on her bodice and sprawling out to the fill the rest of the gown, which was on a mesh flesh-colored base.

Salma Hayek channeled 1920s Old Hollywood glamour in her 2023 Golden Globes outfit, wearing a Gucci gown. The bustier-style gown had a corset like insert around her bodice and a sweetheart neckline adorned in a series of small silver colored sequins. Her gown’s see-through sleeves were embellished with shimmering attachments and had a crystal-like fringe at the ends.

Michelle Yeoh, who won her first Golden Globe for her standout performance in the film “Everything Everywhere All at Once,” wore an Armani Privé Gradient-crystal gown featuring midnight blue sequins from head to toe. The gown also had a skirt-like attachment around her waist and a longer, more form-fitting skirt at the bottom.