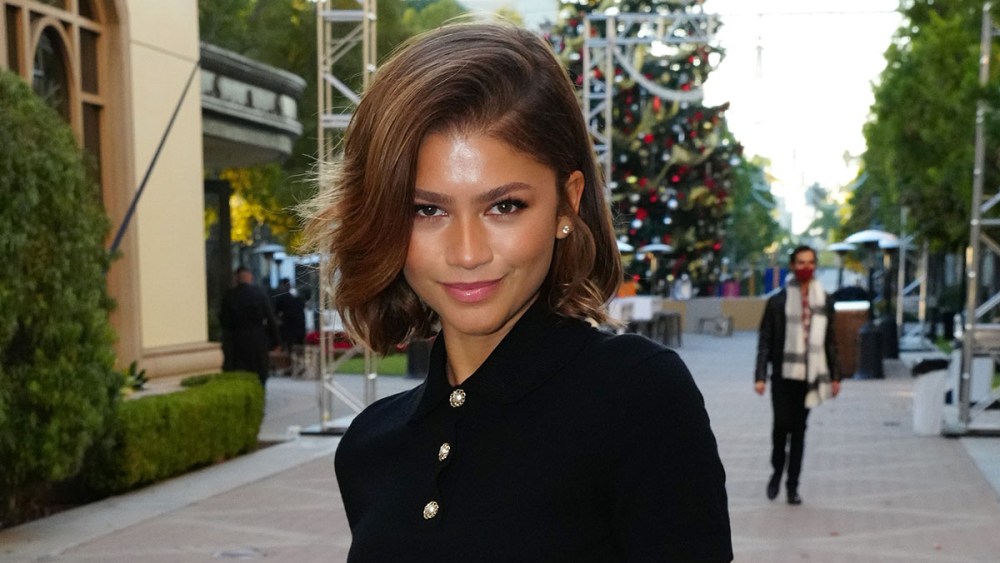 Zendaya arrived in a preppy look to the “Euphoria” FYC event in Los Angeles on Sunday. For the event, which was held at the Paramount Theatre, she wore a black collar sweater and a black and white checkered skirt.

Zendaya’s mid-sleeve sweater featured a mock neckline and three gold buttons at the top. To complete her look, she wore a checkered skirt by Schiaparelli, which included a mid-high slit and a gold padlock at the waist.

She slipped into a pair of pointy-toe black pumps by Christian Louboutin to tie together her ensemble.

Zendaya worked with her longtime stylist and friend Law Roach for this look. Roach, who was awarded CFDA’s first Stylist Award this year, has outfitted Kerry Washington, Celine Dion and Keke Palmer.

For accessories, Zendaya wore a pair of dazzling stud earrings. Her hair was styled into a side part and a curly bob, with a dramatic side bang that framed her face. When it came to makeup, she went simple, with shimmering pink gloss and a touch of face-warming blush.

Zendaya has quickly become one of the most watched stars for her standout fashion looks. At the 2022 Emmy Awards, where she won an award for Outstanding Lead Actress in a Drama Series, the actress wore a custom Valentino gown and paired the look with Bulgari diamonds. The look was designed in collaboration with Roach, who has worked with Zendaya on her fashion statement looks for more than 10 years.

Along with Zendaya, “Euphoria” FYC was attended by Sydney Sweeney, Maude Apatow and Hunter Schaefer. The event featured a screening of season two episode five of the series and included a Q&A. The cast discussed possible trajectories for their characters as the show goes into its third season, with all four actresses set to return to reprise their roles.