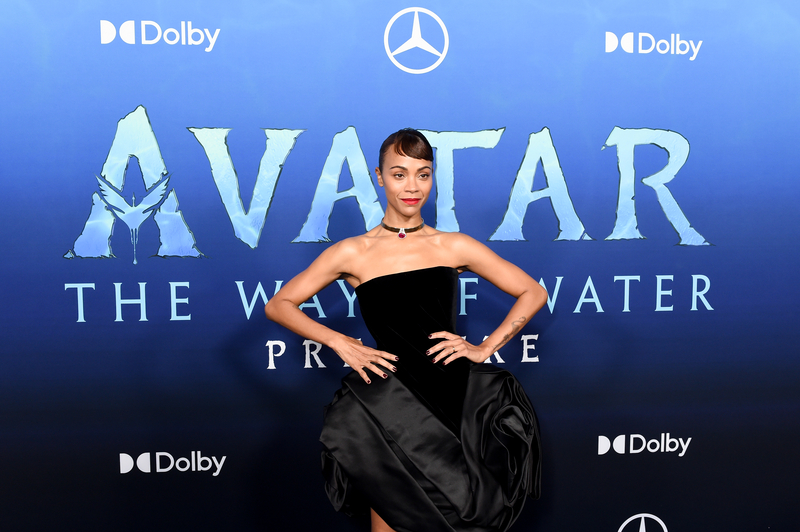 Zoe Saldaña wore a glamourous version of the little black dress at the “Avatar: Way of the Water” U.S. movie premiere in Los Angeles on Monday. For the occasion, the actress arrived in a gown from Schiaparelli‘s fall 2022 couture collection.

Saldaña’s strapless black gown had a structured bodice and a ruffled skirt that mimicked a rose in full bloom with draping effects.

For jewelry, Saldaña wore a gold-colored choker with a shimmering red pendant around her neck by Bulgari. The rest of her accessories consisted of a shiny ring and a Tyler Ellis Lee Pouchet bag with black diamond satin and silver hardware. To coordinate the look, she wore a pair of black Alexandre Birman kitten heels.

When it came to hair, Saldaña wore a slicked-back low bun with a swooping bang. For her makeup, she wore a touch of pigmented bright red eye shadow, black eyeliner and a matching vibrant red lip.

Saldaña was joined by many other stars at the A-list movie premiere, including H.E.R., Heidi Klum, The Weeknd and Halle Bailey. Additionally, also in attendance were Saldaña’s costars, including Sigourney Weaver and Sam Worthington.

Saldaña’s husband, Marco Perego Saldaña, accompanied her to the red carpet movie premiere, coordinating with her outfit by wearing an all-black ensemble.

During the press tour for her new movie, Saldaña has donned many standout looks with this one being the latest. To the “Avatar: The Way of Water” London premiere earlier this month, the actresses wore a beaded-corseted Alexander McQueen gown. She wore an allover sequined sculpted dress and pants that turned into boot heels by Valentino to the movie premiere in Seoul on Dec. 9.

“Avatar: The Way of Water” premieres in theaters on Dec. 16.