The brand is among the high-end international lines showing at the Las Vegas edition of Curve Expo, called Curve NV. 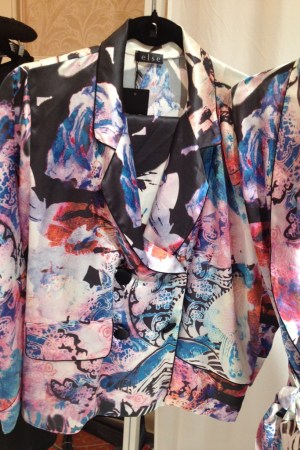 Istanbul-based Else Lingerie is among the high-end international lines at the Las Vegas edition of Curve Expo, called Curve NV, taking place at The Venetian hotel. The brand will also show at Curve’s New York edition, Feb. 23 to 25. WWD caught up with designer Ela Onur on the pink-carpeted floor.

WWD: What are your design inspirations?

Ela Onur: Past eras such as Old Hollywood glamour, flapper girls and the mix of masculine and feminine.

WWD: What is your color palette for fall?

E.O.: I put a men’s collar on the satin robes, and we do double-breasted pajamas. I also mix a contemporary satin underwire bra with bottoms that have ruffle detail. On one soft-cup satin and lace bra, we use pleats and tiny straps that go across the front.

WWD: What are your price points?

WWD: Where do you sell?

E.O.: About 60 boutiques nationwide like Journelle and Faire Frou Frou and in Anthropologie and on Shopbop.com. We also launched in Neiman Marcus last season. We have been around since 2007 and launched in the U.S. in 2008.