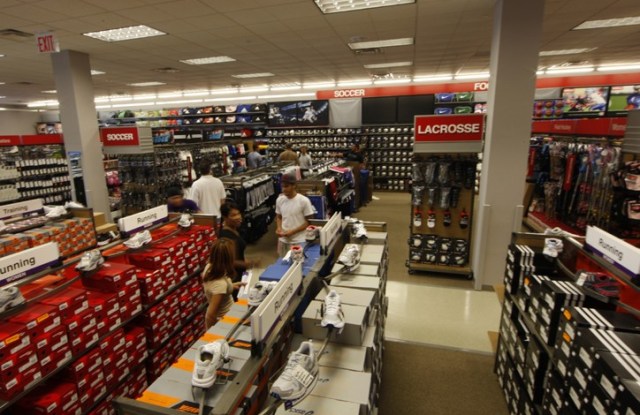 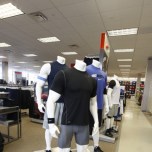 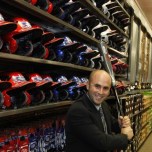 The $600 million, 144-unit regional retailer hopes to score big with a prototype opening Thursday in the Post Road Plaza in Pelham Manor, N.Y., representing the first dramatic updating in 15 years for the family-owned business.

Compared with other Modell’s locations, the prototype is streamlined with delineated “category shops” devoid of clutter, has more seating, wider aisles and a virtually unobstructed vista across the selling floor. “Consumers want a convenient and compelling shopping experience. Those are our two catchwords,” said Seth Horowitz, president of Modell’s Sporting Goods, during a preview of the 18,000-square-foot, one-level Pelham unit.

“Although much of what we’ve done here seems simple, it’s game-changing,” Horowitz said.

The project reflects extensive consumer research over the past year, including 24 focus groups, 12,000 consumer surveys by e-mail, and accompanying 200 shoppers through the stores to gauge reactions. It also reflects the Modell family’s desire to shed the chain’s outdated image and invest in brick and mortar despite the tough economy.

At a theater inside Yankee Stadium today, Horowitz and Modell’s chief executive officer Mitchell B. Modell will explain the concept to 120 vendor representatives as well as bankers, licensing and real estate partners, and executives from professional sports leagues like the NBA and NFL. Then they will be given a tour of the prototype, and later treated to the Yankees game against the Kansas City Royals.

In the ever-shrinking retail sector, Modell’s is a survivor, which Horowitz attributed to the family’s willingness to “make the right investments at the right time” and a local focus. Horowitz believes as a smaller regional, Modell’s can be nimbler with stronger marketing and merchandising tied to professional, college and high school teams. “We are the local, family sporting goods store,” he said.

Modell’s competes primarily against The Sports Authority and Dick’s, both national chains with larger footprints in the 40,000- to 80,000-square-foot range. Modell’s was founded in 1889 by Morris A. Modell with a store located on Cortlandt Street in lower Manhattan. It’s been sustained by four generations of Modells, but with little expansion up until 1963 when there were just four stores. Subsequently, the family began buying up other chains, such as the Davega stores in New York City, Polly Brothers stores in Philadelphia and Herman’s Sporting Goods stores that extended from along the East Coast to the Washington, D.C. market. Since the mid-Nineties, growth has stemmed from store openings. Modell’s stores typically range from 13,000 to 20,000 square feet and are located in power strip centers, regional malls and high-traffic urban locations in the Northeast.

“For the past 10 or 15 years, there was a lull in creative new executions across the industry,” Horowitz said. That is, until this week’s unveiling in Pelham, where he said the most important innovations include:

• Merchandising by category shops, each selling products from a different sport; top to bottom. In the soccer shop, for example, there are soccer balls, sack packs and chin guards, while a “skate culture” area offers ice skates, hockey skates, Roller blades, skateboards and related equipment. Older units have one big sporting goods area, which encompasses multiple sports and requires greater effort to find what you want.

• Revamped footwear departments where styles are stocked right under wall displays, for an easier self-serve. Other stores typically have customers turning their heads and walking around trying to figure out whether the product is on the floor or if assistance is required. By displays of exclusive or limited edition footwear, largely from Timberland and Nike, the new Modell’s has signs instructing customers to get assistance.

• Shops for Under Armour, Nike, The North Face and Adidas. Other key vendors cited by Horowitz include Rawlings, as well as Reebok and Majestic, which are key licensing partners.

• Two “drive aisles” for concentrated presentations of basketball products, and the other for cleats nine months out of the year and boots for three months.

Horowitz declined to say how much was spent on the prototype, or what expense will go to incorporate its features at existing stores. To varying degrees, elements of the prototype will touch more than 100 stores by March 1 and the rest of the chain by the end of next year, Horowitz said. In addition, he said, Modell’s plans to open four to six stores over the next 12 months in the Northeast, and in three to five years could expand to other regions.

But lifting productivity at existing stores seems the priority. Given the economy and the rise of the Internet, Horowitz said, “Retailers really have to maximize floor space to thrive.”