The Golden Globe-winning actress is now an equity holder and partner at Naja, a lingerie start-up. 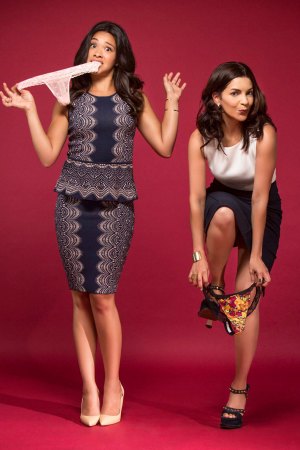 Gina Rodriguez, who stars on the CW series “Jane the Virgin,” is now an equity holder in Girald’s lingerie start-up Naja —pronounced “na-ya.” Rodriguez is another big get for Girald whose investors include Mindy Grossman, chief executive officer of HSN; Susan Lyne, former ceo of Martha Stewart Living and Gilt Groupe, and angel investor Joanne Wilson.

This story first appeared in the October 6, 2015 issue of WWD. Subscribe Today.

“She’s this up-and-coming celeb with such a big voice,” said Girald, who met Rodriguez through a Procter & Gamble project that highlighted emerging Latinas. “We decided that we wanted to work together to empower women and empower Latinas because that’s something that’s on Gina’s radar.”

Girald, a former lawyer, launched Moxsie, an online apparel start-up that was purchased by Fab.com, before she started Naja in 2013. Single mothers or women who are heads of households produce Naja’s brightly printed lingerie in a factory in Colombia. Naja offers its employees child education benefits, which includes free supplies, books, shoes, undergarments and school meals. Naja also operates the Underwear for Hope program that trains and employs at-risk women.

“I grew up in Colombia and the States, so I was exposed to poverty,” Girald said. “It’s hard for single women with children to make ends meet and we wanted to help them.”

Over the past two years Girald has worked on revamping the intimate apparel supply chain and in 2014 she purchased a factory in Colombia where Naja’s lingerie is now produced. Girald works with only five different recycled fabrics that are purchased and digitally printed in Los Angeles.

“Because we are digitally printing we can make one piece, we can make 350 pieces or we can make 1,000 pieces, therefore our minimums are reduced substantially,” she said. “The ability to make one product at the same cost of making 10,000 products opens up the door for personalization and things that have never really been done before.”

Girald said lead times for lingerie are typically 12 to 18 months while it takes Naja’s three to four months to produce its collections. According to Girald, this process leaves her without excess inventory and with 80 percent gross margins.

To date, Girald has raised $1.7 million and is actively looking to raise another round of money.

The assortment, which is sold exclusively on Naja’s e-commerce site, consists of various themed collections, a line of basics and swimwear. Bras, which range from 32A to 36DD, retail around $50; panties retail around $25, and swimwear made from recycled plastic bottles retails at $95. The inside of each piece features a print, which according to Girald signifies beauty is on the inside, and uplifting quotes such as “Don’t be like the rest of them, darling.”