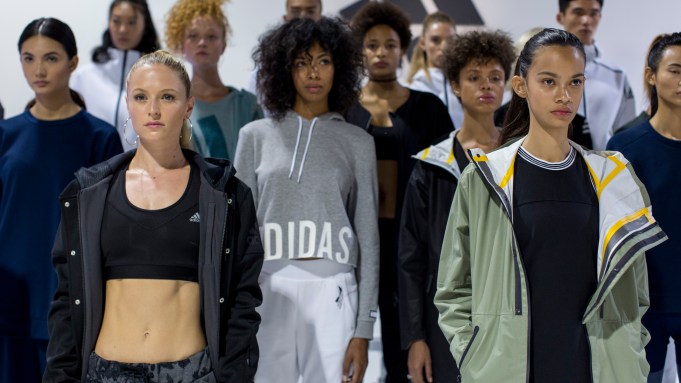 NEW YORK — At first glance, Tuesday night’s Adidas event at Skylight Clarkson Sq looked like one very elaborate party for what is essentially a white hoodie.

Once attendees had taken the requisite walkabout, ex-NFL-er Keyshawn Johnson led an onstage chat with Rob Lee, vice president of design for Adidas Training and Kate Ridley, vice president of training for Adidas North America. Male and female models wearing the ZNE hoodie sat quietly in the top row of white bleachers. Later, a fleet of models wearing all sorts of Athletics attire cruised in and sat casually in rows of white bleachers.

While drinks were served and swag doled out, attendees were encouraged to take a closer look at the Athletics apparel featured on nearby fixtures. And then rapper Fetty Wap performed.

But for Lee and Ridley, the launch of Athletics was the main event. Within the next 18 months, Adidas Athletics should comprise at least 50 percent of global apparel sales, Ridley told WWD. “We are setting a new brand identity and that’s going to take some time to resonate,” she said.

Twenty months of development and wear-testing — four months longer than the norm — were needed to finesse the ZNE — an abbreviation for zero-negative energy, Lee said. Geared for all sorts of athletes — from European soccer teams to NCAA ones — the hoodie’s oversized design is meant to help drown out noise and shield them from distractions. (Think Olympic swimmer Michael Phelps’ prerace stare-down in Rio, as his rival Chad le Clos stood by shaking out the muscles in his arms.)

Adidas had 800 of its own athletes try out the ZNE before deciding on the final version, said Lee who flew in from the company’s home office in Herzo, Germany for the launch. The decision to only offer the ZNE in white was a big decision for the brand, he said. The $100 unisex hoodie will be available starting Sept. 7, but select fall streetwear-infused items are rolling out now. Worldwide, 20,000 athletes tied to the brand will plug the item via social media on that day. “We need to make sure that this is very closely associated with sport. We don’t want to blur the lines too much,” Ridley said. “We want the athletes who are representing this product to help consumers understand where it comes from.”

With a dropped construction, the fit is meant to be a bit more modernistic than old-school collegiate. And as the somewhat slack-looking models at Tuesday’s event relayed, the collection has an athletic-inspired streetwear feel.

The design of the hood is oversized so that wearers’ mouths are covered — a request made by many athletes who do not want competitors to be able to read their lips when speaking with coaches and teammates on the sidelines. The hoods will also shield them from media stationed waiting for athletes’ arrivals, Ridley said.

As a sign of its anticipated growth, Adidas has started staffing up its design studio in Brooklyn, which is still being developed. The company hopes to have that “very large space” up and running possibly by the end of this year, Lee said. Overseeing Adidas’ Stella McCartney business among other subgroups, he declined to comment about future collaborators. “It’s always exciting as a brand,” he said. “And we have so many people who want to work with us, which is really nice and such an opportunity.”