The brand will launch its Beyoncé collection in mid-January, one of several initiatives planned for this region.

By Jean E. Palmieri and Rosemary Feitelberg on December 5, 2019

Adidas wants a bigger chunk of the American market.

At the end of 2018, Adidas had an 11.5 percent share of the U.S. athletic footwear retail market and a 5.4 percent share of its activewear market, according to NPD’s Matt Powell. But Zion Armstrong, the company’s North American president, wants to significantly grow its share.

In an interview at Adidas’ new 45,000-square-foot New York City headquarters in Greenwich Village, Armstrong, a New Zealand native and 21-year Adidas veteran, said the U.S. represents 40 percent of the global sports market, “so our biggest opportunity is here.”

He said that with a market penetration in the low single digits, “there’s an immense opportunity. We’re moving out of the minors and into the majors.”

He hopes to raise the company’s sales in America by zeroing in on innovations in product for both performance and lifestyle, enhancing its sustainability initiatives and launching some key collaborations, including the first collection with Beyoncé, which will make its debut in mid-January.

For the most part, the brand has been doing well of late. In November, parent company Adidas AG reported that overall revenues in the third quarter of this year rose 9 percent to 6.41 billion euros, with a 6 percent gain for the Adidas brand. There was also growth of 10 percent in North America. And company executives are expecting the fourth quarter to be even more robust. For the whole of 2018, the group had sales of 21.91 billion euros, with the Adidas brand generating net sales of 4.27 euros in North America versus 3.84 billion in 2017 — an 11 percent change.

Although Armstrong declined to provide a sales breakdown between performance, or sport product, and lifestyle, sport represents “a significant chunk of the business,” he said.

“In 2015, we were very reliant on casual product,” Armstrong added, but the pendulum has now swung toward sport. That has led to Adidas increasing the number of athletes it works with across all professional and collegiate sports including Aaron Rodgers, James Harden, Aaron Judge and P.K. Subban, all of whom he considers “family members,” he said. “These are icons we didn’t have five years ago.”

Noticeably, Armstrong did not mention any high-profile female ones until he was asked about them. Armstrong cited new recruits like five-time world champion alpine ski racer Mikaela Shiffrin and Olympic swimmer Katie Ledecky as well as World Cup soccer player Lindsey Horan.

“Our biggest opportunity is in women’s,” he said. Although men’s wear still represents 60 percent of the brand’s business, Adidas sees the chance to increase its reach with women as it works more closely with female athletes. Armstrong said the brand recently started to live stream high school girls’ sports on Twitter, and has already drawn more than 24 million video views.

But it’s not just women’s sports where Adidas is focusing. It’s also pushing its lifestyle product, a category in which it has had “immense success.” Case is point is a collaboration sneaker with Prada that sold out immediately after its launch on Wednesday.

In January, another high-profile product line will launch when the company introduces a line with Beyoncé.  The multiyear deal, revealed in April, will consist of two ranges — one performance and the other catering to ath-leisure, he said. “Beyoncé is a phenomenal creator both on the stage and off the stage. She’s really helping us also push the boundaries for performance fabrics, technologies and fit. It’s not just ath-leisure.”

Adidas also has some other big names in its stable, including Kanye West, Pharrell Williams and Stella McCartney. He said these brands operate as “open-source partnerships” with their own business units that allow them the “freedom to create.” Although West said at last month’s Fast Company Innovation Festival that he owned the Yeezy brand Adidas produces, Armstrong said Adidas is the sole owner — “It’s part of our business.” However, Armstrong corrected that statement today through a spokeswoman saying West owns the Yeezy brand.

Adidas global brands director and executive board member Eric Liedtke, who helped accelerate sales for Yeezy and other celebrity talent, will end a 26-year run with the company next month. While Liedtke plans to move back to Portland, Ore., his successor, Brian Grevy, returns to Adidas after a stint at Gant. Last month Liedtke deferred comment, when asked if he plans to work with West in any capacity once he moved on in January, to an Adidas spokeswoman, who said the company “would not be able to comment on speculations.”

While Yeezy has been rooted in Calabasas, Calif., Portland remains “an extremely important hub to drive these partnerships because that’s where our teams are,” Armstrong said. In addition, design and development for Yeezy products has begun in Wyoming, but Armstrong said, “At this stage, we can’t comment whether we will manufacture.” He also declined to reveal how large the team in Wyoming is, saying it’s “still in the making.”

West reportedly spent $14 million on Monster Lake Ranch, a 9,000-acre spread near Cody, Wyo., and nearly $15 million on Bighorn Mountain Ranch, a 6,713-acre property outside of Greybull, Wyo. West declined an interview request regarding his plans for Wyoming through a spokeswoman, who floated the possibility of a Yeezy one at a later date. During last month’s Fast Company event, he told the crowd, “Yeezy is going into innovation. We’re going to be farming and going seed-to-sew and have our own cotton hydroponic farm and our own hemp farm and our own farm, so we can see every element. And getting into how we can have less impact with the dyes. Our color is a big signature of the brand, but also dyeing is one of the main things impacting the planet and the fashion industry. Just being responsible from A to Z.”

This ties into another of Adidas’ big pushes: sustainability. Adidas AG’s stated goal is to replace the use of all virgin polyester with recycled marine waste by 2024. Adidas and Parley for the Oceans introduced an upper for footwear in 2015 that was made entirely of yarns and filaments reclaimed and recycled from marine plastic waste and illegal deep-sea gillnets. This year, Adidas is expecting to produce 11 million pairs of shoes with this Ocean Plastic by Parley product, which is created by collecting plastic waste on beaches, remote islands and coastal communities.

“There are more microplastics in the ocean than fish,” Armstrong said. “We have a short window of time to fix this.”

In 2017, it introduced Futurecraft.Loop, a completely recyclable performance running shoe that, when ready to be replaced, they are intended to be returned to Adidas, where they will be washed, ground to pellets and melted into material that will be used to create a new pair. 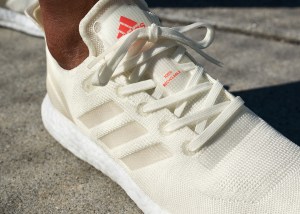 Adidas has also started to make uniform jerseys and cleats from recycled plastics as well.

“The goal is to continue to scale this,” he said. 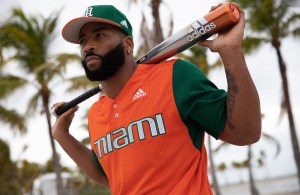 Armstrong pointed to some key innovations that Adidas has created. These include a range of 4-D running shoes using Carbon Digital Light Synthesis digital light projection, oxygen-permeable optics and programmable liquid resins, as well as a partnership with the International Space Station U.S. National Laboratory where its products can be tested and improved.

The company is also investing in its people. Five years ago, the Portland head office housed about 700 Adidas employees. There are now 1,800. A company spokeswoman declined to specify how many of those employees previously worked for Reebok and relocated to Adidas, following a round of layoffs at Reebok’s head office in 2016. The location is also undergoing a renovation and expansion which will double its size, Armstrong said, by the end of next year.

In the New York office at 435 Hudson Street, 85 staffers were filtered in, during a three-phase effort that ran from April through August. The company has 30,000 square feet on the building’s ninth floor and about 15,000 square feet on its third floor. There are 16 showrooms in total, as well as private meeting spaces, glass-walled offices with shared seating and more clandestine two-person upholstered seating with three high sides. About 80 to 90 people now work in New York, and the company has recently opened offices in Chicago and Los Angeles.

“Hundreds of millions” are being poured into Adidas’ facilities, Armstrong said. To better serve the supply chain, a distribution center debuted in Pennsylvania four months ago — its first direct-to-consumer facility in the U.S. That set-up will enable shoppers in America to get online products delivered within 48 hours. Adidas still runs its Creator Farm in Brooklyn — a must-visit for many new Adidas designers who are based in Germany to give them a better understanding of what’s happening in the U.S.

Understanding the U.S. market is key to Armstrong’s mission. “We want to be the best sports brand in the world, and to do that, we have to win in America.”

But that won’t include any acquisitions, he said. It will, however, involve increasing sales across all channels. The company has 230 stores in the U.S., but executives declined to specify how many of those outposts were freestanding stores, concept shops and outlet stores. Adidas plans to close two Speedfactory sites in Atlanta and Ansbach, Germany, by April 2020 at the latest. In these increasingly automated times, the company plans to use its Speedfactory technology for athletic footwear production with two suppliers in Asia.

A new digital-concept flagship in London, which opened at the end of October, has been designed to be flexible, immersive, service-oriented — and entertaining. Armstrong said several of the features introduced there will soon make an appearance in the company’s stores here. “We’re going to take inspiration from that,” he said. Although the New York City flagship is relatively new, opening three years ago, it’s already outdated. “It just goes to show you how fast the industry is changing,” he said.