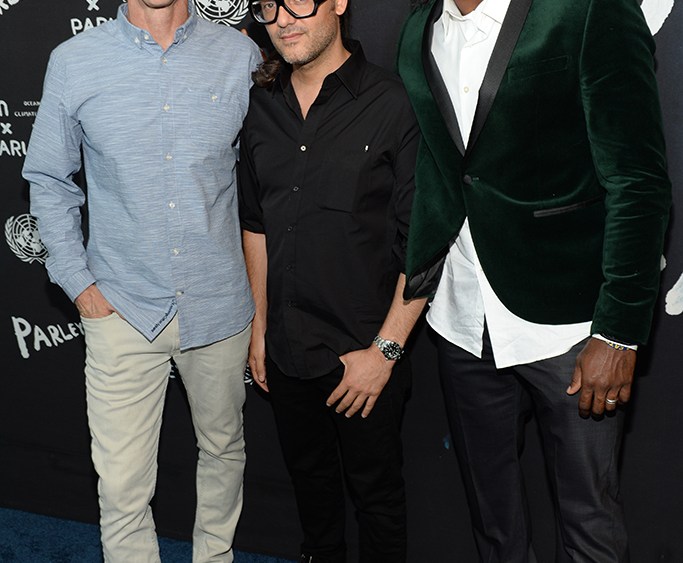 “So can I sit where Fidel Castro did?” asked one guest in search of a seat in the United Nations’ General Assembly at Monday night’s Parley for the Oceans talk.

By chance, minutes before the “Oceans. Climate. Life.” discussion, Parley founder Cyrill Gutsch had said everyone should have a seat at the table when it comes to turning back climate change. “With the ocean, no one can solve this alone – no way. I believe in the creative industries having to alleviate the burden. The environmental problems we have on this planet are all caused by business and bad business. The only way to correct that is to redesign the business. And designers are the people who decide what product comes next and what materials are used. It’s a power that is not per se connected with money. It’s the creative capital that drives this planet. The only way to solve this is to invent ourselves out of the situation,” he said. “You have to get the best people to work together. Otherwise, you will not create something really awesome. When you look at Apple and all these great brands, it’s because people work together in a collaborative way.”

Gutsch, a designer in his own right, highlighted the timeliness of the discussion, noting Elizabeth Kolbert won a Pulitzer Prize this year for her nonfiction “The Sixth Extinction: An Unnatural History.” He added, “Stanford’s Paul Ehrlich’s new study said that the next big mass extinction is here. And the pope – who else should speak out like that?”

After Captain Paul Watson was beamed in from Lyon, France, a video about aquanaut Sylvia Earle aired and remarks from several others, including David Rothschild and Ora Ito, followed. Eric Liedtke, executive board member responsible for global brands at Adidas, spoke about his company’s partnership with Parley and its pledge to use recycled plastics from the ocean for all polyester made consumer goods. That commitment should amount to 260 million polyester T-shirts in the next year, he said. “We partnered with Parley to save the ocean because we must stop wasting and we must start acting. And we must start somewhere. The ocean sustains all of life and it’s dying,” Liedtke said. “The key is collaboration. We must all come together because none of us has all the answers. We need to help find plastic alternatives.”

Tim Coombs, co-founder of Bionic Yarn, a New York City-based company that makes fabric from recycled ocean plastic, also spoke of how his company’s efforts “took quite some time.” The entire team based everything on the model that “If you can do it and it’s sustainable and of high quality, you can be successful.”

One of Bionic’s investors, Pharrell Williams, who is more of a frontman for Adidas as a brand ambassador, did not make it to the U.N.as planned. He headed to Worthy Farm instead for Glastonbury. But other style setters made their way down the blue carpet before Jacques Cousteau’s grandson Fabian emceed the discussion. Maria Cornejo, Alexandra Richards, Olympia Scarry, May Kwok, Chris Benz and Genevieve Jones also attended. Monday’s talk was held in conjunction with the High-Level climate change event convened by the General Assembly’s president H.E. Sam Kutesa earlier in the day.

As an ambassador for the Oceans campaign, Richards said she wanted to lend her support and get ideas for upcoming events. Having been invited by conservationist Nan Hauser to swim with the whales in the Cook Islands, the DJing model is hoping to clear her schedule for a little beach time in the months ahead. “My family lives in Turks & Caicos so I will go to visit them in September and I’m hoping to spend Thanksgiving and Christmas there,” she said.

Liedtke, Adidas Group executive board member responsible for global brands, also unveiled the first prototype of a shoe with an upper made from yarns and filaments reclaimed from ocean waste and illegal deep-sea gill nets. Parley partner Sea Shepherd retrieved those nets following a 110-day expedition tracking an illegal poaching vessel, which ended in West Africa. More ocean-plastic products will be introduced later this year by Adidas.