Miami Swim Week pivoted with digital platforms, and brands and buyers said they have seen huge increases in sales since July. 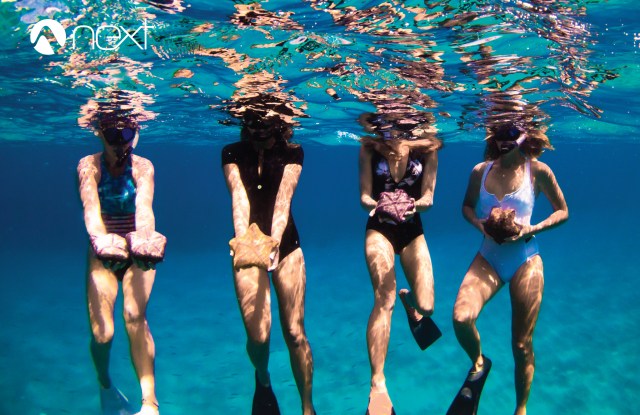 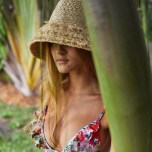 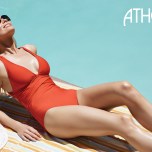 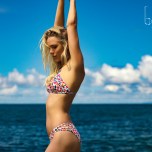 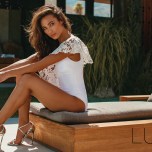 Swimwear has sailed into the tumultuous high seas that have rocked much of the fashion industry. The category showed signs of fraying around the edges at the start of last summer’s Miami swim market — NPD Group Inc. at the time attributed flat sales to oversaturation and ath-leisure’s rise. When COVID-19 hit, swim was further downgraded to a replenishment story, according to Kristen Classi-Zummo, NPD’s director of market insights, apparel.

“Women are buying separates, which tells us they’re replenishing and getting by with what they need to wear in their backyards and maybe not splurging on those suits to show off on vacation,” she said.

Her data concludes that sales of swimwear dipped 21 percent in units for the second quarter compared to last year, with women’s accounting for 80 percent of that decrease. Compared to swim’s double-digit declines before April, the following months through June only saw single-digit sales drops and grew substantially month to month. Even as much of the fashion industry struggled, the pandemic did reveal bright spots, and swim and resort fell under those comfortable or essential items.

“People may not be traveling, but they might be enjoying pools and beaches at home. Inflatable pools and above-ground pools were up by triple digits in April and May,” Classi-Zummo said.

“Nothing can replace the live show — it’s just the nature of the industry that you need to see swimwear on the body — but we achieved a great tool and can now take it to the next level,” she said.

Cabana trade show, which relocated from beachside tents to the convention center last year to meet demand, saw exhibitors drop by two-thirds. Cabana cofounder Janet Wong said 115 brands were prepared for its inaugural virtual marketplace built on Joor Passport through an exclusive partnership with wholesale transaction platform Joor from July 20 to Aug. 20. Since Zoom meetings take longer than booth appointments, Wong gave everyone a month versus the usual three days.

She said talks about adding a digital component for ongoing discovery and engagement started before the pandemic, and most retailers were already familiar with Joor. Brands are listed alphabetically, or buyers can browse with filters. She’s hopeful more collections — which were sidelined by production delays, orders stuck in transit and not being able to shoot campaigns — will be ready for Cabana’s next round on Sept. 22. Pandemic or not, Wong called digital absolutely essential.

“Buyers are normally running around to appointments at multiple shows, and it’s a lot for them to handle. Now they can spend time looking at new lines and getting back to people.”

Bypassing these initiatives, many conglomerates and established brands reached out directly to their major accounts. Red Carter, who designs several lines for Amerex Group including Jessica Simpson, said virtual presentations were an awkward learning curve.

“It’s like having your own reality show, and you better be good at it,” he said, having Zoomed with Dillard’s, Macy’s, Bloomingdale’s, Bikini Village and Everything But Water. “It takes a lot of planning ahead, too, like sending fabric swatches and videos prior to virtual presentations with live models.”

Carter has had a tough run: His namesake collection is on hold until next year, and his team is down to three employees after 25 percent of the company was laid off. He’s also taken a pay cut. But positive moments come along.

“We were selling 10,000 units a week around Fourth of July, ridiculous numbers,” he said.

Gottex was in good shape by the time the pandemic hit the States, according to its U.S. president Karine Laferriere. The company sourced European fabrics and moved production from China to Morocco. Being headquartered in Israel, it further lucked out in having selected Israeli model Sofia Mechetner as its new face. She came out of quarantine for a photo shoot at the in-house studio. The web site’s new online showroom and detailed video re-create the in-person trade show experience as best as possible. Laferriere said it’s an invaluable asset for road reps, too.

“It’s surprising how efficient and easy it’s been. Buyers can review and play with collections afterward, unlike when they leave our showroom with papers,” she said.

Relieved that none of Gottex’s buyers had fallen ill, Laferriere said accounts are still being cautious given so many unknowns.

“I hope next spring will be a better time for travel,” she said.

Canceled trips have been a boon for Mermaids Swimwear Boutique in South Miami. Owner Jessica Sierralta, whose wealthy clients substituted summering in Europe and Colorado with Bahamian boating trips and Florida staycations, didn’t miss a beat by providing home deliveries during shutdown and scheduling solo in-store appointments when the city reopened. She pivoted with her own swimwear collection, Kai Lani, through Re-mix, a sustainable capsule collection locally sewn with leftover fabric from previous seasons.

“My customers are nonstop shopping,” said Sierralta, who’s grateful to have written bread-and-butter brands L*Space and Beach Riot and hot newcomer It’s Now Cool, which was founded by a veteran swimwear photographer, after seeing how many skipped July appointments altogether. “It’s slim pickings. Swim week was wiped out this year.”

“We could have really used that merchandise,” she said, Zooming for immediates and resort 2021 in case travel resumes in winter. “I’m leaving some money to chase and keep looking, since you don’t get the full feedback from virtual presentations that you get from walking the shows.”

L*Space merchandising manager Brittany Fielding said the virus may actually extend the traditional swim season as people stay home from work and school. Aside from boosting buy-now-wear-now swim sales, the shutdown has also benefited the brand’s two-year-old, elevated loungewear category, which she refers to as “two-mile dressing for running errands.” It accounts for 55 percent of the collection’s apparel category. Sustainable is another area of growth. L*Space recently implemented sustainable practices such as swapping suits’ poly bags with a recyclable material and offering a capsule collection every season in fabrics made from recycled plastic bottles. She said the goal is to be 100 percent sustainable.

“Even though it’s a higher price point, we’re building on it because of its success,” she said.

Classi-Zummo upheld that it’s a viable niche. NPD’s survey of 1,500 consumers ages 18 and up found that a third think sustainability is just as important during the pandemic, with older demographics even more committed to the cause.

“Gen Z could be influencing older generations, and COVID-19 is making people more aware of global issues,” she said.

“We’re focusing on the industry’s white spaces,” said Raj vice president of business development Nicole Haase, adding the shutdown has been a golden opportunity to map the company’s vision and enhance its digital strategy, including a presence on TikTok and high-tech sales presentations. “We’re reassessing our DNA and repositioning some lines and curated them since buyers are stretched thin and just don’t have the time.”

Raj design director Holly Swope has responded to difficult circumstances by focusing on seasonless colors and prints and convertible bodies that offer more bang for your buck. She sees her customers, spanning tweens to their mothers, moving away from matchy-matchy suits. Swope also feels in tune with women who are searching for piecemeal items to refresh their wardrobes rather than a total overhaul.

“She already has a lot. I know that I stripped back on my purchases but spent on my kids because I don’t want them to go without,” she said.

Here, the 2021 trends in swimwear as seen at the shows:

Sleeve interest inspired by the runway and Zoom dress