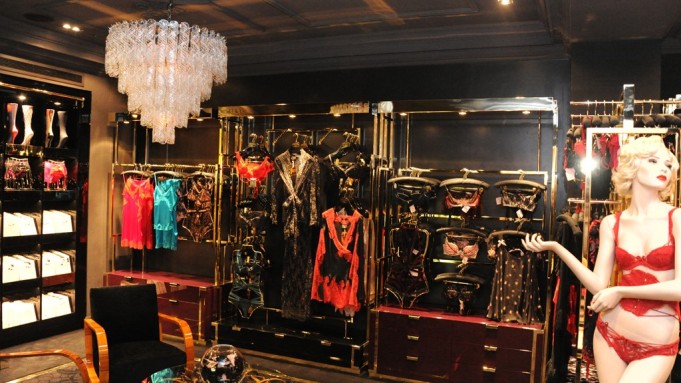 LONDON — After an aggressive international rollout, Agent Provocateur has come home to London and will open for business today in Mayfair.

Although the British lingerie brand already has outposts here — the original shop is on Broadwick Street in Soho — this is the first time Agent is playing alongside the big brands in Mayfair.

“We really wanted a London flagship that was like our Madison Avenue store,” said Garry Hogarth, the brand’s chief executive officer. “This is almost twice the size of the Broadwick Street store, and we’re expecting to get a different customer. There’s more tourist traffic from Bond and New Bond Street.”

The new store is located in a former pub — the Grosvenor Arms — on Grosvenor Street, just off Bond Street. It spans 1,200 square feet and stocks the mainline and Soiree collections. Like the recently opened Via Verri store in Milan, the Mayfair store has a cozy, boudoir-ish feel with black carpets and a fitting room wall with hand-painted flowers.

In a nod to the building’s pub origins, there’s a vintage jukebox done up in the brand’s signature pink and gold, and replica stucco ceilings.

It is the brand’s 70th unit worldwide, and its seventh in London after Broadwick Street, Westbourne Grove, Pont Street, the City of London, and shops-in-shop at Selfridges, and Harrods.

Agent Provocateur sells exclusively through its Web site and its own shops, which will number 72 by the end of the company’s financial year in March. Twelve more stores are in the pipeline for the year beginning in April.