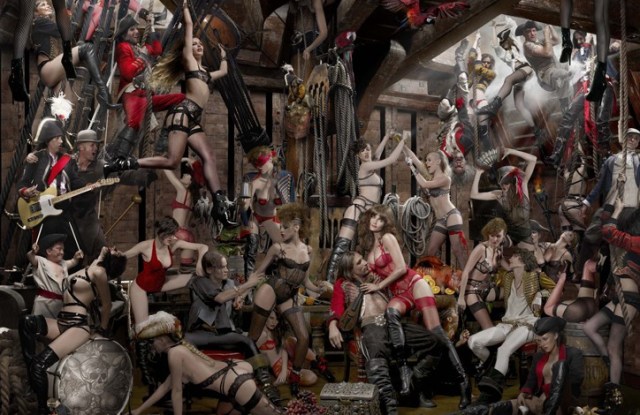 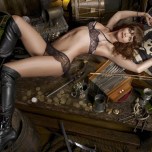 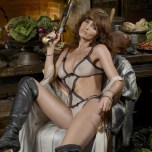 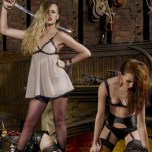 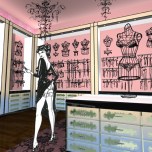 If escapism is a pathway to selling in a tough economy, then Agent Provocateur may be on the right track.

This story first appeared in the December 22, 2008 issue of WWD. Subscribe Today.

After dressing Kate Moss as a runaway bride in an advertising campaign last spring that caused Agent Provocateur’s Web site to crash when the model’s fans flocked to view the images, the British lingerie brand and retailer keeps pushing the envelope.

The latest ad campaign, titled “Pan and the Vestry of Virgins,” will hit magazines and agentprovocateur.com in January. It’s the third of a four-part series of saucy themes of “Tableaux Vivants” that will follow a successful “Pirate Provocateur” effort launched in November featuring model Helena Christensen as the “Pirate Queen,” said Joe Corre, co-founder of the brand and creative director.

Visuals of the January campaign are not yet available, but several Bacchus-inspired vignettes will feature models portraying Agent Provocateur maidens under siege and Pan, the Greek God of fertility. The final theme will be “Picnic Debauch,” set to run in late spring. The series kicked off in September with “The Season of the Witch,” which Corre described as a “dark and sinister” coven of witches in Gothic, lace-edged lingerie who have captured a few sacrificial virgins.

Explaining the concept of the ads, Corre said, “Again, with Pan we were looking at various ideas. Pan is a very pagan motif and it’s all about rites of spring, and it fitted very well with our spring collection. There’s a certain wildness about it, like Pirates. But it’s light, angelic and mythical with a certain softness and conveys the pleasures of the pagan ritual.

“Pirates is very popular with us because they are outlaws and in a way, Agent Provocateur is a brand which was started independently and carved its own path through the fashion industry,” he said. “In a sense, it doesn’t necessarily obey the rules of retail marketing and appeals to the inner outlaw of people. It looks like such a romp.”

Poster catalogues of the campaign are available at Agent Provocateur boutiques, where customers can pick one up free of charge, Corre said.

“They’re all over London, in places you wouldn’t think of seeing them,” he said.

Although Corre said it would have been amusing to portray Pan in the campaign, he did appear in the main image of the Pirate Provocateur ads in the belly of the pirate ship alongside guitarist Mick Jones of The Clash, wearing a pirate coat designed by his mother, Vivienne Westwood. The four-part campaign was photographed by Tim Bret Day.

On the retail front, Agent Provocateur, which was acquired by private equity firm 3i in November 2007 for an estimated $123 million, opened its ninth U.S. boutique in Chicago on Dec. 8. The other U.S. boutiques are in New York, Boston, Miami, San Francisco, Los Angeles and Las Vegas, as well as two in-store shops at the Bloomingdale’s flagship in New York and the South Coast Plaza store in Costa Mesa, Calif. There are 44 store locations worldwide.

Asked how the lingerie specialist gauges retail hot spots, Corre said, “One of the things we look at when thinking about opening stores and existing stores is the high propensity of sales coming from a particular area, and we look at Web sales and geographics where we have pockets of consumer base. In the U.S., Chicago has been on target for a while. We certainly get a fair propensity of people coming to our New York store on Mercer Street from Chicago.”

Corre said customer service and research are important to the business.

“We are very focused on service to our customers and try to look after them, and recognize who they are,” he said. “All of the girls in the stores have customer books; we have a Club Agent Provocateur on our Web site and people can watch videos, and people get newsletters and a preview of sales. It’s quite easy for us to look at these patterns.”

He added that the format of the boutiques vary, with each having its “own character.”

“As a general rule, I don’t like shopping malls,” Corre said. “We don’t like to take a shell-box. We like to find something interesting about them. That’s what we did with our first store in Soho in London.”

Asked about launching a unit during the recession, Corre said the “decision to open the store in Chicago came before this economic climate.”

“When we started the Agent Provocateur brand in 1994 in the U.K., there was a strong recession,” he recalled. “It’s not like we’re going off like gang busters, opening up stores all over the place. Stores take 18 months to three years to really establish themselves. That’s across the board in retail. We like to establish a business with customers who make a purposeful trip to our stores.”

As for the brand’s merchandising, Corre feels it’s properly priced. Retail prices run from $55 for a cotton brief to $900 for a woven silk kimono.

“We use high-quality fabrics and lace from France and Italy, and the manufacturing is top notch,” he said. “Our products in the end are still an affordable luxury. You spend a couple of hundred dollars, stay at home during this economy, and wear your lingerie and have a good time.”

Regarding a collection of men’s innerwear, Corre said, “We’ve considered doing it for some time. We probably will in the future.”