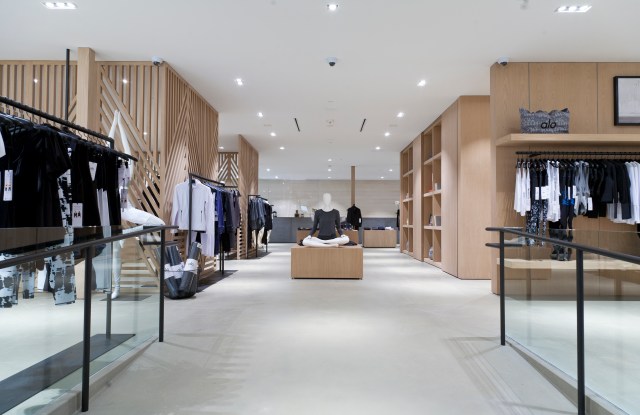 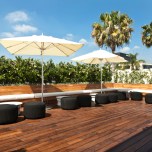 Alo Yoga has made its move.

The ath-leisure brand — which has found its way onto the likes of Gigi Hadid, Kendall Jenner and Alessandra Ambrosio — is its parent’s fastest-growing label and today opens a more than 7,000-square-foot space that’s a cross between a store, yoga studio and small café in Beverly Hills. The move marks the first of what’s expected to be many doors for the yoga brand, which could scale to around 20 stores in the next few years, according to cofounder Danny Harris.

Pricing range from $50 to $60 for sports bras and leggings starting at $70 up to $110 with the company catering to a mostly Millennial customer, aided in part by its heavy presence on social media. The Alo Yoga business, to date, has grown largely through wholesale distribution in stores such as Nordstrom, Neiman Marcus and Bloomingdale’s as well as CorePower Yoga and Equinox. The company also has a three-year-old catalogue business, although Harris said that’s mainly seen as a marketing maneuver more than a major source of revenue.

“We are interested in being able to design what we want to design and be able to produce what it is we want,” said Harris said of the company’s philosophy when it comes to wholesale and other growth in general.

Alo Yoga is owned by Los Angeles-area company Color Image Inc., which has a multibrand portfolio that includes Bella Luxx, and employs a workforce of about 800 at its headquarters, which not surprisingly boasts a yoga studio, workout facility, tea bars and meditation gardens.

One could say the new store is a slice of the Alo Yoga headquarters or “lifestyle” the brand aims to be. The store’s lower level is where all the merchandise is housed, with a mix of men’s and women’s apparel, along with candles, soaps, shoes and items from other brands. The back of the store serves organic Stumptown coffee, Kombucha on tap and juice from Raw Juicery. Food from Café Gratitude is also available.

Upstairs takes visitors to a rooftop deck and yoga studio where classes will be held.

The company — owned by founders Harris and Marco DeGeorge — searched for real estate for nearly two years, eyeing spots on Melrose Avenue in Los Angeles, Santa Monica and as far out as New York before settling on Beverly Hills at 370 North Canon Drive.

“What I like about this street is if you were to look around, it’s so much about culture,” Harris said. “We have restaurants all over. It’s not Rodeo Drive where it’s store after store. I really liked this building and I liked this street and I didn’t want to just be like all the other retailers and open right next to a Lululemon or a Gap — not that there’s anything wrong with that. It’s just that we like to do things a little different.”

Alo Yoga’s foray into brick-and-mortar also helped give it the confidence to get back into men’s, a business it tried its hand at about five years ago with the market reaction mostly tepid. In company-owned stores, it will be easier to control the presentation and product offerings for not just men but it’s entire assortment, Harris said.

Men’s relaunched with a small collection of what Harris called the “core basics” consisting of shorts, pants and tank tops.

As for Alo’s future, much of the energy is on retail with the next set of doors likely to be relatively close to home in places such as Santa Monica, Laguna Beach and San Diego.

As the company scales brick-and-mortar, it will experiment with different store formats, meaning not all will be as sizable as Beverly Hills. Some may be smaller, serving mainly as showrooms and more focused on greater synergies with online ordering.

Harris and DeGeorge started Color Image 24 years ago out of high school and remain its sole owners with no outside investors. “It was always about being different,” Harris said.

“[Alo Yoga] was our smallest brand. It’s not anymore, but this brand really speaks to our culture, who we are [and] this lifestyle that we live here in Los Angeles,” he said. “A lot of these things that we apply to Alo we apply to our other brands as well, just the idea of sustainability and transparency and so on. As the Millennial becomes more powerful they can influence buying decisions and as a result of that, it’s really made our company grow significantly.”