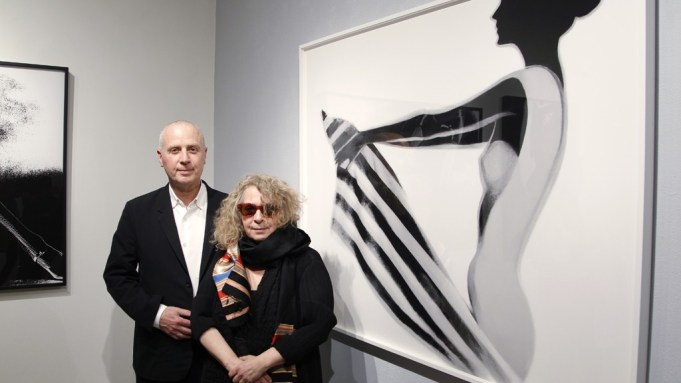 The black-and-white images  — spanning the 1940s to her last work completed five days before her death on Feb. 13 at age 94 — portray a private realm where women appear to be effortlessly self-possessed in various modes of undress.

Bassman, who treated fashion photography as an art form, told WWD in 2005 that “finding new dimensions, changing things I’ve done and seeing it in a different way” kept her close to photography throughout her career.

Bassman continued to reinvent herself and her work as recently as January by working in Photoshop and retouching the highlights and shadows of the iconic images of women that she shot over 50 years ago.
“Photographically speaking, I’m completely tied up with the softness, fragility and the personal problems of a feminine world,” Bassman told WWD in January.

At the reception, her daughter Lizzie Himmel, also a well-known photographer, recalled how she literally grew up in her mother’s famed photo studio where she played dress-up with the clothing, accessories and props.

“I was the studio brat….The studio was my playground after school and I liked to hang out in the darkroom,” said Himmel.

“I remember coming home after school and seeing Suzy Parker with a horse in the studio wearing Jimi Hendrix’s jacket and playing his guitar…getting some wonderful ballet slippers from [prima ballerina] Melissa Hayden, and seeing Carmen [the model Carmen Dell’Orefice] in a bathing suit posing in a huge musical fountain,” said Himmel.

Asked if her mother was temperamental on a set, Himmel replied, “She was a perfectionist…never loud. She thought it was bad manners to be loud. She charmed everybody and she got people to talk to her and want to do things for her. She was very serene….There was no panic…very unlike my father’s studio. [Her father, Paul Himmel, was a fashion and documentary photographer.]

“Quirky things used to happen to her,” continued Himmel. “She would land in Paris and for some reason there would always be a duke or a count who would want to show her around town. She would always say ‘Why are they giving me so many flowers and so much Champagne?’ I remember she did the lead show of a Spanish photo fest at The Prado in 2002, and Queen Sofia of Spain, who always wore gloves so she wouldn’t have to touch anyone’s skin, suddenly appeared and then her staff disappeared. The Queen walked next to my mother discussing the photos as if they were old friends.”

A retrospective of Bassman’s work is also available in the newly released book, “Lillian Bassman: Lingerie” (Abrams, $29.95, 127 pages), which features more than 80 black-and-white photos that showcase the quintessential feminine image of women in lingerie. Bassman’s son, Eric Himmel, is editor in chief of Abrams.

The exhibit at Staley-Wise in Manhattan runs through May 26.