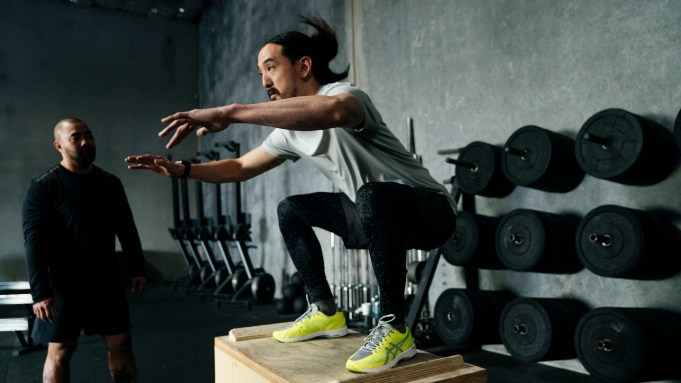 Asics Americas is hoping to up its cool quotient.

The brand that is best known for its premium running shoes is preparing to unleash a marketing campaign intended to engage a younger consumer who may not necessarily be a serious runner.

The secret weapon in the initiative that will be unveiled today is a new association with red-hot DJ/record producer and fashion designer Steve Aoki.

Aoki, who has more than seven million followers on Twitter and 5.6 million on Instagram, appears in a video with his song “Kolony” as the backdrop that Asics will showcase on its social media channels. The clip highlights both Aoki’s musical background as well as his athletic abilities. Dancers and athletes are also part of the film. Its tag line is “I Move Me.”

It is intended to “set the tone for the new brand identity and philosophy — self-expression through movement colliding with culture and sport,” the company said.

The initiative will include partnerships with influencers as well as in-store and off-line activations that will continue into next year. It is the brand’s most significant marketing effort in two decades.

“To call it a marketing campaign is trite,” said Gene McCarthy, a 21-year veteran of Nike, Under Armour and other sports brands who joined Asics two years ago as president and chief executive officer of Asics Americas. “People only care about your brand when they know what the brand stands for.”

Founded in 1949 by Kihachiro Onitsuka, who began manufacturing basketball shoes in his hometown of Kobe, Japan, the company is publicly traded corporation based in Japan and its name is an acronym for the Latin phrase “anima sana in corpore sano,” which means “healthy soul in a healthy body.”

McCarthy, who has completely restructured the company’s Americas division since coming on board, said the idea is to “tell a story that is deeper than running.”

Although the brand had sponsored the New York City Marathon for 25 years — New Balance took over this year — and 30 percent of all marathon participants wore Asics last year, McCarthy knows that in order to grow, it needs to branch out beyond athletes.

The Bronx-born McCarthy, a former elite runner who ran a 3:59 metric mile in his youth, believes it is his personal responsibility to promote a healthy lifestyle.

“The new look and feel for Asics is in response to uniform marketing campaigns from like-minded brands in recent years but also the nationwide decline in sports participation in today’s youth,” he explained. “Why are we telling people how to move, instead of encouraging them to move the way that makes them happy.”

He said instead of signing a big sports star or celebrity to promote its product, which he believes the “consumer sees right through,” Asics hopes to inspire a new appreciation for movement among the younger generation.

He said Aoki’s Japanese heritage — although raised in Southern California, his father was a former world-class wrestler who founded the Benihana restaurant chain — as well as his penchant for athletics represented the perfect combination for Asics.

“My life is not only about music and fashion, but also fitness, nutrition and health,” Aoki said. “I’m really grateful for an opportunity to partner with an athletic brand that not only supports the same philosophy as me and allows me to infuse my DNA into the creative process, but is also aiming to inspire and encourage others.”

McCarthy said the U.S. represents one-third of the brand’s global business and is the company’s “most important market. It recently relocated its headquarters to Boston from California, moving into the backyard of competitors New Balance, Reebok, Saucony and others.

As part of this initiative, Asics will focus in more on its archival products — shoes that are “fun, comfortable and nostalgic,” McCarthy said.

In addition, the brand is preparing to open a store on Fifth Avenue in Manhattan, which has been set back due to construction delays. In 2015, the brand terminated its retail operating agreement with Windsor Financial Group LLC, resulting in the abrupt closure of 13 Asics stores in the U.S.

McCarthy said he couldn’t discuss that situation, which resulted in a lawsuit between the two companies that has yet to be resolved completely, but he expects the new flagship to open shortly.

There are also plans to open stores at the Mall of America in Minneapolis, the International Market Place in Honolulu and in Toronto.

In addition, Asics Tiger — a different division of the same parent company — is opening its first concept store in the U.S. at 276 Lafayette Street in SoHo on Nov. 2. Asics Tiger is a lifestyle-focused brand that is more closely tied to the Japanese culture.

“We’re positioning our stores to be the voice of our brand,” McCarthy said.