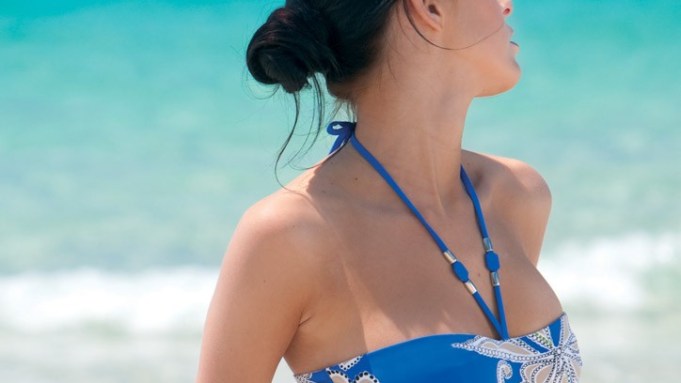 PARIS — After a challenging year, “added value” was a buzzphrase for retailers and vendors at the Mode City lingerie and swimwear fair here.

Brands, said retailers, many with flat budgets, were particularly focused on quality.

Key trends included the proliferation of lines catering to shapewear and larger cup sizes. Top colors for the spring season were blues, reds and yellows, among others.

“Retailers are being very demanding,” said Hélène Masson, brand manager for Lejaby. “Whereas before they could take product because it was beautiful, today there has to be added value. They’re after standout pieces that differentiate.”

Attendance at the three-day fair, which ended Sept. 6 at the Porte de Versailles, fell 5 percent to 24,568 visitors compared with last September. Italy, Germany and Spain were the top three countries in terms of visitors after France.

The offerings were “fabulous and it’s great to see brands moving on to larger sizes, as that’s what we cater to,” said Arpita Ganesh, director of Buttercups, a high-end lingerie store in Hyderabad, India, that plans to open five more stores there in the next year.

Swimwear brands cited brisk business. Peter Halas, director of Seafolly, which doubled the size of its stand, said sales for the year ended July were up 29 percent. “The most important thing is no one wants to make a single sale. [Retailers] are looking for accessories — cover-ups have increased enormously,” he said, adding that the brand, which operates 25 stores in Australia, is mulling a presence in Europe, likely beginning with a store in London next summer.

A specialist in larger cup sizes, Empreinte presented its revamped swimwear line, featuring pop colors and prints, which it hopes to grow to the same level as innerwear in terms of sales. Magalie Lagathu, head of marketing and design, said weakened sales in France were offset by strong growth in exports, notably to the U.S., Canada and the U.K. Sales to the U.S. and Canada were up 30 percent, she said.

Angela Sinclair, commercial manager of Belgium’s Cette, producer of the Trinny & Susannah by Cette shapewear line, cited growing demand from customers of all shapes and sizes for allover solutions, rather than just bottoms. “The girls who buy this tend to be those you wouldn’t think need it, but who are interested in the toning and shaping properties,” she said. “They can’t stand a lump or bump.”

“For intimate apparel, it’s certainly an area that’s captured the attention of the market right now….Brands have all understood that shapewear is a growing business,” said Ninabeth Sowell, global marketing director of Invista’s intimate apparel and swimwear segment.

High-end British bridal and intimates brand Jenny Packham presented its new sleepwear line, featuring a layered chiffon baby doll with feather trim and embroidered silk satin kimonos. The items retail from about $640 to $1,130. A spokeswoman for the brand said it received a lot of interest from key Middle East retailers.

Trend guru Jos Berry, president and chief executive officer of Concepts Paris, said there was an “avalanche” of beautiful loungewear at the show, especially new knits combined with traditional knits from Switzerland.

Berry identified “casual luxury” as the key new direction for the innerwear market, which she defined as “something that is extra luxurious in feel and look but that you’d like to wear every day. You see that especially in the Interfilière [fabrics] salon — the best embroiderers, lace and jacquard manufacturers, the top-of-the-range [mills], are ready for that. They now have embroideries that are moldable and laces that are incredibly soft. You have plain materials, which allow you to do all sorts of complicated engineered designs. There’s a whole world of digital printing that allows people to inject small series.”

Lejaby adjusted its collection to focus on fantasy undergarments for daily wear, such as a Levers lace bra with anticlip straps. The brand also introduced a decorative organic cotton line.

“Comfort is key, even young women are no longer prepared to ‘suffer to be beautiful,’” said Jaques Ponnard, president of the National Chamber for Independent Lingerie Retailers and owner of Grain de Soi, a lingerie store based in Bergerac, France. “The G-string is over — panties have risen up to the belly button.”

Daniela Roncagliolo, who was scouting product for a lingerie store she plans to open in Santiago, Chile, cited Damaris among standout collections. “European collections tend to be a little too sophisticated,” she said. “This was very different, fresh, young.” Considering what she would have to add for transportation and taxes, Roncagliolo found the lineup of brands pricy.

Philippe Vertriest, brand director for Andres Sarda, which was acquired by Belgian lingerie manufacturer Van de Velde in 2008, said the company had seen a retailer shakeout but was making new connections. The brand strategy is focused on the Andres Sarda premium line and the Sarda diffusion line, launched in fall 2009, which Vertriest predicted will grow to about 70 percent of sales. “We’re renewing ties with customers we lost in the U.S. and are actively prospecting,” he said.

In terms of distribution, several brands said the outlook for independent innerwear retailers in France had stabilized, with a new generation of specialty stores gaining market share. These stores are pushing service — notably fit expertise — as well as brand selection and innovative store design as their strengths.

Specialty chains have stagnated in big towns and are adopting smaller formats to enter smaller locales here, he said, while service-oriented independent retailers were zoning in on districts with high spending power.

“During the crisis, those brands proposing excellent service came through,” said Patrice Kretz, ceo of Chantelle, which unveiled a marketing campaign featuring model Tatjana Patitz. “The point of difference between high-end and mass market brands will not lie in style but fit — especially for big sizes,” he added. The group, which saw a slight drop in 2009 sales, intends to continue developing its multibrand mid- to high-end Orcanta lingerie chain, which it plans to streamline in terms of clarity of offer.

Guido Campello, vice president of branding and innovation for Cosabella, which recently launched a line with J. Crew, said the brand was looking for similar opportunities with retailers in Europe and had received interest from apparel stores during the fair. “Chain stores are becoming more like mini department stores.…They’re looking to rejuvenate their offer,” he said.

The next edition of Mode City is July 9 to 11 at the Porte de Versailles. Eurovet will also introduce a separate complementary Cruise by Mode City trade fair scheduled to run concurrently with the Who’s Next and Prêt à Porter trade shows from Sept. 3 to 5, which will cater to fashion-oriented swimwear and innerwear brands targeting clothing stores.