Ath-leisure Basks in the Spotlight at Intermezzo

Retailers braved the cold weather to augment their spring/summer inventories and get a jump on fall merchandise. 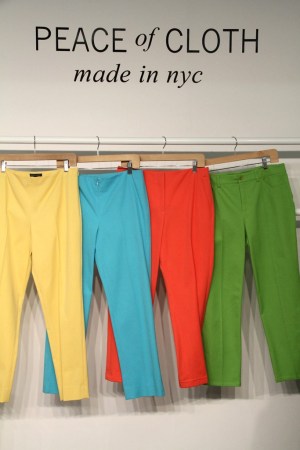 Ath-leisure dominated the conversation at Intermezzo, the three-day trade show at Piers 92 and 94 in New York.

Retailers braved the cold weather to augment their spring/summer inventories and get a jump on fall merchandise. Patterned and cropped leggings, yoga pants, cross tanks, crop tops, track jackets, sexy tops for night, two-fers such as denim jackets with knitted sleeves, rompers, and plaid shirts were among the items on retailers’ shopping lists. Overall, there were 318 exhibitors at Intermezzo.

“Ath-leisure was very prominent. They were really pushing the active,” said Courtney Quinn, contemporary analyst at the Doneger Group, noting mannequins displayed at Piers 92 and 94 were sporting athletic looks.  The show featured a Flex area with vendors such as Koral Activewear, Zara Terez, Phat Buddha, Nux and Ultracor, which had crowded booths.  Early indications of fall trends at Intermezzo were outdoorsy looks, urban hippie and men’s wear influences, Quinn said.

Maxine Becker, owner of Alene Boutique, in Plantation, Fla., said she was shopping for immediate merchandise that she can sell in February, March and April. She was buying silk tops at Rory Beca and shirts from Rails. “Rails is very easy. It has no age,” Becker said. “Rory Beca is who I use for dressy tops. It pairs very well with denim and also dressy silk pants or a leather miniskirt,” she said. The silk camisoles are great under blazers, she added. Other collections she liked included Seven Seventy, a line from Tel Aviv, which had a “rock ’n’ roll vibe and was a combination of one-of-a-kind pieces” and Planet, “which had great linen and cotton knits and rayon jerseys.”

Becker observed that the way people dress has changed. “We see so much athletic wear and jogging bottoms. Nothing is formal anymore. People want to be comfortable. Everybody exercises,” she said.  She said that she wished that the next show, Coterie, would be held in March, rather than February. “February is too close to this, and it’s too far away to be thinking of fall,” she said.

Audrey Bergrin, owner of Audrey’s Sweet Threads, a women’s specialty store in Ohio, said she was buying relaxed tops from Lola & Sophie in washable silks and jerseys. She also bought a loungewear line from Wellicious. “The thing I love about it was it’s made in Europe of organic cotton, is very comfortable and well-made, and it looks like you can go out to lunch with it,” she said.

Bergrin also bought sexy and sophisticated day and evening looks at Yoana Baraschi and pants from Avenue Montaigne. “My favorite is the Billy — a straight leg basic which is very comfortable and not as tight as a legging. They wash and look fabulous. I have consistently carried Avenue Montaigne, and I’ve sold it to the piece. I have women who buy this nonstop,” she said.

Jennifer Dayan, owner of I Found a Secret, a two-unit retailer in Brooklyn and Oakhurst, N.J., said she was buying denim jackets from Jet by John Eshaya, that mix denim jackets with sweatshirt fabric or waffle knits. “I’m loving slashed and destroyed, and I’m on the hunt for great night tops,” Dayan said.

Dayan’s 2,000-square-foot stores hire stylists as salespeople. “I don’t let you walk out unless you know how to wear it,” said Dayan, a former stylist herself. She was looking to bring in several different activewear lines, such as Koral Activewear.  “They have a lot of pockets without it being bulky. Girls are enjoying being able to run and have pockets. It’s functional.  “It’s a great show. I’m finding a lot of softer pants. There’s not so much denim, but rather cargo pants and more flowy pants. Utility is coming back with pockets,” she said.

Barry Rosenthal, owner of Unique Wear, a 2,800-square-foot retailer in Hollywood, Fla., was also on the hunt for activewear. Among the lines he was purchasing were Hard Tail, Lyssé and Veronica M. “Ath-leisure seems to be the hot topic,” he said.

Vendors were pleased with the pace of business at Intermezzo.

“We wrote a lot of immediates,” said Jaime Nortman, managing partner at Peace of Cloth. She said retailers were buying spring/summer merchandise. “People are starting to write closer to delivery,” Nortman said. She was selling a lot of color, as well as a performance activewear group that included drawstring pants. She was also having success with polished looks of pants and jackets in polyester/viscose.

Rails, which is represented in the Community Service Showroom, was doing brisk business. The company wrote orders with Saks Fifth Avenue, Intermix and Shopbop, among others. The plaid shirts, made of Tencel, wholesale from $58 to $67. “This has been the best show. It’s been really busy,” said Natasha Silver, owner of the Community Service Showroom. “Most people are buying summer right now and sprinkling in some immediates,” she said.

Seven Seventy, which showed at Intermezzo for the first time, produces its line in Tel Aviv. “We are learning the market,” said Nira Geifman, export manager. The collection includes handmade printed sweatpants and T-shirts with studs. “In Israel, we introduce 15 to 20 new items every week, and make 30 of each. For the American market, we will make a collection each season.” The collection is designed by Shmulik Ben-Shushan. The line wholesales from $50 for T-shirts, $99 for dresses and up to $200 for jackets.

After a capsule collection for Nov. 25, Lyssé has introduced performance fashion for spring. The collection has an exercise focus and is geared toward barre and exercise studios. “But specialty stores are jumping on the wagon, too,” said Michele Slade, East Coast regional sales manager. They developed a custom fabric for leggings that has mesh inserts and cotton gussets. The leggings wholesale for $35, the skirt and crop pants are $45 and the wrap is $49.  “Everything is washable,” she said.

Ultracor, a new line from Michael Ball, founder of Rock & Republic, showed its debut collection for spring. The company, which makes activewear wholesaling from $60 to $100, worked with such retailers as Intermix, Shopbop, Bandier and Carbon 38 at Intermezzo, said Saville Dorfman, sales manager.

Lisa Shaller-Goldberg, owner of Minnie Rose, was pleased with the pace of business. “The show has been fantastic. We opened tons of new accounts and broke fall at this show.” She said she was doing a  lot of immediates business and also getting a jump on fall. For fall, there’s a Navajo theme, including lots of fringe, blankets, ponchos and embroidery. She’s also showing chunky cotton yarns.

John Eshaya, founder and owner of Jet by John Eshaya, said, “We’ve become jean jacket connoisseurs,” pointing to a denim jacket with waffle-knit sleeves. He said he saw many of their regular accounts at the show. He was showing pull-on beach pants with jogger bottoms and pull-on drawstring yoga pants. “Everyone wants new. I can’t show anything again. Everybody’s looking for new bodies,” Eshaya said.

Daniele Chemla, owner of Avenue Montaigne, said in addition to seeing her current accounts at the show, they opened accounts such as Henry Lehr and Peter Elliot.