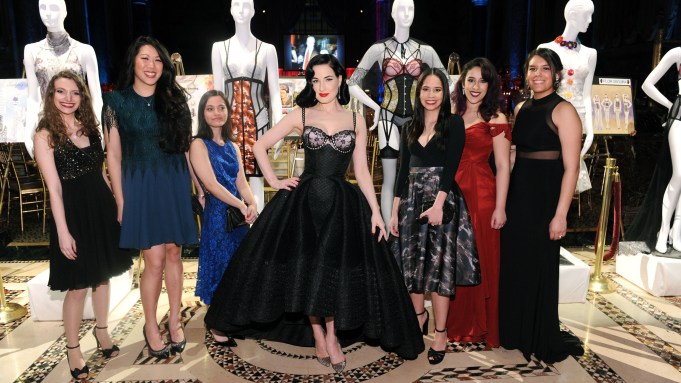 NEW YORK – Even without a strip tease, Dita Von Teese didn’t disappoint as emcee for the annual Femmy Awards at Cipriani 42nd Street, sponsored by the Underfashion Club, which promotes the intimate apparel industry and student education.

Von Teese, dressed in a Zac Posen corset skirt and a bra from her own collection, confided, “I don’t have a lot of experience public speaking, but I do have experience wearing lingerie. Every time I make a mistake, I am going to take something off.”

Fortunately — or unfortunately depending on one’s view — Von Teese stumbled over her words only a few times and seductively pulled off her shoulder straps. Earlier, she confided to WWD, “A seductress of the highest order…is a woman finding confidence in herself,” and who makes her lingerie selection foremost for herself.

“I began an apparel career with a suitcase full of sweaters,” Trust told the crowd. “In 1982, when it was a five-store chain, Les Wexner bought Victoria’s Secret for $1 million. He called me and said he needed bras and panties and asked if I could make them. He didn’t know that I didn’t make much intimate apparel at the time.”

Trust said he kept growing his business by adding production space and meeting the product demands of VS. “Creating a business that impacts an industry is very rewarding. It’s also very rewarding to be able to see that my lifetime of work will exceed my own life.”

The first place winner of the Femmy student design contest was Kimberly Paley, who received $5,000 and a trip to Paris Mode City provided by Eurovet and Curvexpo. Second place went to Valerie Lopez, who received $4,000, and third place was Laura Leong, who was awarded $3,000. The other students, Diana Betances, Dayra Galarza and Rebecca Victor, each received $1,000.