The California lifestyle brand, which is known for its soft women’s basics, is expanding into sleepwear for holiday. 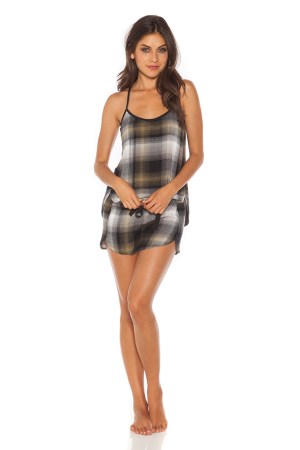 The California-based lifestyle brand, which is known for its soft women’s basics, will introduce three styles of pajama sets for holiday.

“Everyone associates us with super soft fabrics and what’s better than super soft sleepwear?” said Kerry Jolna, chief executive officer and president of Bella Dahl, which launched in 2002 but was rebranded in 2010.

The collection, which is made from a soft, brushed rayon plaid, includes a camisole and short set, a short sleeve top and jogger pant and a pajama pant and a short sleeve top. The sets will retail from $110 to $136. Bloomingdale’s has picked up the line and it will also be available on Belladahl.com starting this November.

Bella Dahl’s women’s wear is sold at retailers including Nordstrom, Bloomingdale’s, Saks Fifth Avenue and Neiman Marcus. According to Jolna, he’s focused on international expansion. Last year the brand entered Europe and has shipped to Canada and Australia since 2011. Bella Dahl also distributes in Saudi Arabia and Japan and will grow its business in Asia.

Jolna said Bella Dahl’s top category is woven tops made from Tencera denim, the brand’s proprietary fabric. Newer categories include bottoms, which Jolna said are expanding dramatically, and sweaters. For fall, the brand will introduce a jumpsuit with tuxedo stripes.

According to Jolna, in 2014 the brand grew by 108 percent and he expects another 60 percent increase in business this year.