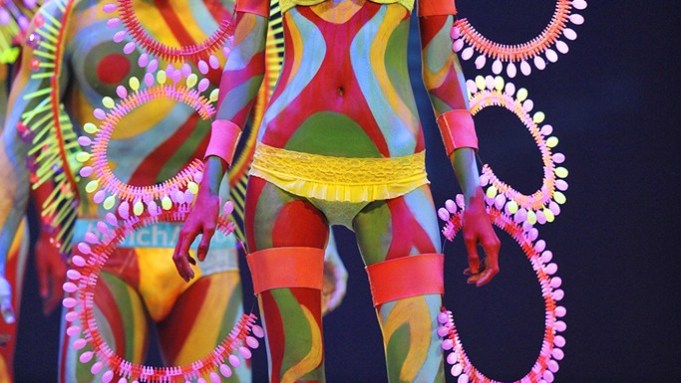 It’s one of the hottest tickets in town. The biannual sold-out Bench Body fashion show is a spectacle that combines the over-the-top glitz of a Victoria’s Secret fashion show with the drama of Cirque du Soleil and the raunchiness of a Chippendales’ performance.

For many men and women — Philippine celebrities, socialites and movie actors, as well as Asian pop stars and Brazilian models — to be part of a Bench Body show is a coveted invitation, signaling one’s desirability and marketability; after all, you need to have killer abs and heaps of self-confidence to parade down the runway in the skimpiest of underwear in front of tens of thousands of spectators.

Retail magnate Ben Chan, the creator of the Bench brand, one of the Philippines’ most popular local apparel and lifestyle labels with stores throughout the country, is himself bemused by the immense popularity of the shows.

“It started very small. The first show was inside a famous nightclub in Manila in 1988, with just the press in the audience. It was to create publicity for our first Bench Body billboard starring a famous actor in just his underwear. But everyone started talking about the event and the billboard, so we mounted a slightly bigger show after,” he said.

Public clamor, he added, is the rationale behind the show becoming a regular event. “Before long, the momentum just kept growing that we decided to put up a show with 40 celebrities walking down the catwalk in their undies in a coliseum that could seat 25,000 people. This was in 2002.”

Since then, it’s become something of a national event, which “the public looks forward to and demands, since it puts together all these stars from rival TV networks in one platform, the only event that can do so,” Chan added.

The last event, in 2012, was called Bench Universe, and it took place over two consecutive nights to accommodate the live audience. It included a cast of epic proportions: more than 100 dancers, 100 models and 80 celebrities. It was also televised throughout the Asian region.

Chan said that as Bench expands into regional and international markets — the Singapore store opened in December, joining the other Bench and Bench Body stand-alone stores in China, the Mideast and the U.S. — the show itself has become increasingly global. Bench has always relied on a strong lineup of Asian brand ambassadors — known locally as endorsers — which have included Korean, Chinese, Taiwanese and homegrown Filipinos alongside international stars of Filipino lineage, as well as Hollywood stars.

“Through the years, we’ve flown in acrobats from France, drummers from Japan, models from ‘America’s Next Top Model,’ dancers from Los Angeles…. Even our own boxing champion Manny Pacquiao strutted down the stage,” said Chan. “This is reflective of the diversity of our market’s taste. We embrace not only the international faces of Hollywood but also the most exciting Asian personalities. Korean stars, in particular, have become leading style icons.”

“Of course, this diversity of endorsers is also reflective of the expanding global image of the brand,” he stated.

As to what the theme of this year’s Bench Body show will be, Chan simply said, “We’re keeping it secret! The challenge now is how to top the last one.”