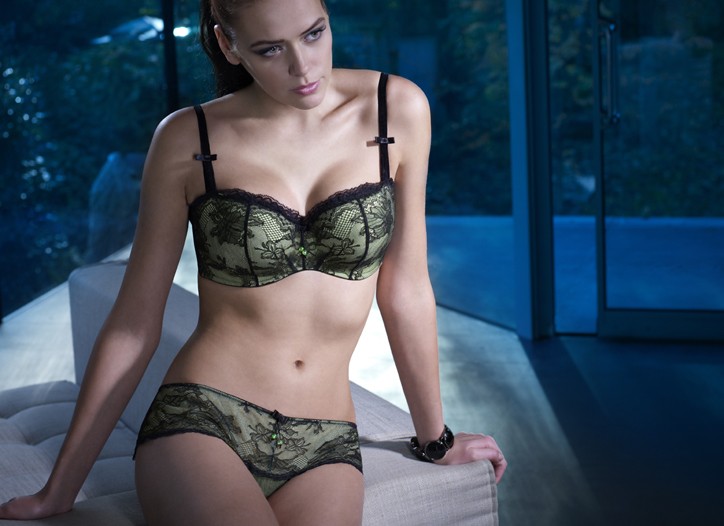 Bra sizes in the U.S. are larger than ever as manufacturers and retailers try to accommodate the rising number of full-figure women.

The median size a decade ago was 36C. Now there is demand for DD, DDD and G cups, and bra makers are reaching even higher with a K cup.

The business impact of full-figure bras and related undergarments is substantial. Retail sales of full-figure bras from 2008 to 2009 rose 3.3 percent, to $2.15 billion, and the number of bras sold in the category gained 7.4 percent to 158.8 million units, according to research firm NPD Group. Overall sales of bras last year increased 1.1 percent and accounted for $5.8 billion of the total $10.67 billion innerwear business.

Several factors are turning a traditional niche area into a flourishing category. The obesity epidemic has generated a base of consumers that is demanding a wider choice of basic, fashion and specialty product.

Oprah Winfrey, whose power to make a bestseller, spawn trends and influence public opinion is unrivaled, introduced Bra Fit Interventions, explaining proper fitting, to millions of viewers on her television show. She feels so strongly about the subject that Bra Fit Tips for full figures are featured on oprah.com with the tagline, “Ladies, Rise to the Occasion.”

“It was definitely a wakeup moment for women when Oprah did her Bra Fit Interventions,” said Maureen Stabnau, senior vice president of merchandising at barenecessities.com. “Oprah is the champion of bra fitting and full-figure bras.”

Celebrities such as Mo’Nique, this year’s Oscar winner for best supporting actress, and her “Precious” co-star, Gabourey Sidibe, have raised the profile of full-figure women.

This combination of girth and glitz in the overall full-figure segment — underscored by retail sales increases of 10 to 25 percent over the past year — is adding a level of acceptance to what is considered attractive, fashionable and sexy.

Manufacturers and retailers are trying to keep up with demand as the full-figure consumer base builds, industry executives said. More offerings have been available since Winfrey took G cups out of the closet, but product launches are not keeping up with the full-figure consumer’s appetite for fashion, color, innovation and styling.

“The whole culture has come to see fuller figures as a different level of attractiveness,” said Renee Fraser, a consumer psychologist and an adjunct professor of communications at the University of Southern California’s Annenberg School of Communications. “The Dove soap ads three years ago [depicting full-figure women in underwear] were a pivotal turning point in advertising, which promoted beauty from the inside out with all body types.”

Manufacturers and retailers are careful how they market and merchandise full-figure products because of the sensitive nature of how the message is perceived among large-size customers who want the same colors, embellishments and styles as average-size women. As a result, the category in intimates is often a confusing mix of terms such as full-figure, full-busted, full-fitted, DD plus, or plus size.

Overall, the full-figure category is identified as women who wear a dress size 16 or larger, compared with a size 14 a decade ago. It is comprised of women — ranging from teenagers to senior citizens — whose bra band and cup size generally start at a 36DD or 38C and goes to a 58C, 46K or larger.

In the Seventies and Eighties, the median bra size in the U.S. was 34B, industry executives said. It grew to 36C in the Nineties and the median size has reached 36DD over the past several years. Band size defines a clear distinction between a busty woman with an average figure who wears a 28-to-34-inch band but is a G cup, and a plus-size woman who may not have large breasts, but whose band size ranges from 36 and larger and is a C or D cup.

In the last five to 10 years, a new crop of full-figure brands entered the U.S. with a variety of fashion looks and embellishments. They include Prima Donna, Marie Jo, Eveden, Freya, Anita, Elomi, Fauve, Aviana, Panache, Cleo, Harlequin, Conturelle, Enell and Lunaire. Even heritage bra brands that are known mainly for average-size bras, such as Chantelle, Empreinte, Lise Charmel, Le Mystere, and Wacoal and its young, contemporary b. tempted brand, have introduced larger cup sizes in the DD and G cup range over the past year.

Their target is a U.S. population where more than 65 percent of adults are overweight or obese, with almost 31 percent of adults — more than 61 million people — meeting criteria for obesity with a body mass index (BMI) greater than 30. That represents a 5-foot, 5-inch woman weighing 180 pounds. A BMI between 18.5 and 25 is considered healthy. That’s equivalent to a 5-foot 5-inch woman weighing 140 pounds. About one-third of Americans fall into that healthy category, and approximately one-third are classified as overweight, with a BMI of between 26 and 30. The National Institutes of Health attributes the rise of obesity to environmental, social, economic and behavioral factors, including a more sedentary culture and inappropriate diet.

The highest volume full-figure innerwear brand in the U.S. is Just My Size, owned by Hanesbrands Inc., which rang up estimated retail sales in excess of $700 million last year.

The overall plus-size apparel market generated retail sales of $17.89 billion in 2009 compared with $18.32 billion the previous year, according to NPD Group. The plus-size market fared slightly better than average-size apparel with a decline of 2.3 percent versus 4.9 percent of the total women’s apparel market.

The full-figure bra business has been robust in a challenging economic climate.

Linda LoRe, president of Frederick’s of Hollywood Group Inc, said full-figure bra and corset sales have grown 10 percent over the past several years.

“Women want to look sexy no matter what size they are,” she said. “Part of the [full-figure bra] growth has come from women who have had breast enhancements, as well as those who have natural bustiness. They range from women in their late 20’s and early 30’s to 40 and 50-year-olds who want fashion.” Frederick’s offers bras up to an F cup.

Stephanie Sobel, president of onestopplus.com, a division of Redcats USA and parent PPR which owns Gucci Group, said: “For the specific onestopplus.com site, we have grown the customer e-mail file [consumer base] over 60 percent against last year and over 100 percent over the prior year, for an average of 80 percent file growth per year over the last two years…this line of business has untapped potential because this consumer wants more. Because of that we are happy to host site launches for new brands.”

Onestopplus.com launched its proprietary brand, Comfort Choice, in 2008 with bra cup sizes going up to an I cup.

Dan Sakrowitz, vice president of marketing at barenecessities.com, estimated the company’s plus-size business “has grown from roughly 20 percent in three years to about 25 percent.”

He said best-selling bra sizes have changed dramatically since 2002, mainly in the D cup range, such as 36D, which is the second best-selling bra and was in the sixth slot in 2002, and 32DD, which moved up 12 positions from the 18th spot. Barenecessities offers bras up to an H cup.

Carrie Klein, senior vice president of merchandising at plus size chain Lane Bryant, said the retailer, which carries bras up to an H cup, three weeks ago rolled out its T-Shirt Bra. It comes in fashion colors and prints and is in 775 doors. “Based on the success of the T-Shirt Bra, we are very interested in maximizing with added styles and related product,” she said.

We’ve sold a ton of [full figure] bras, 40,000 across seven stores in 2009,” said Susan Nethero, chief executive officer of Intimacy, a nine-unit specialty chain that offers bras up to a K cup. “Full-figure bras have sold far faster and larger than average-size bras. Full-busted sales have grown by at least 10 percent over the past year, and 74 percent of my bra business is now with cup sizes larger than DD.”

Regarding new full-figure product launches, Nethero said, “I wish there were more. We are not getting enough new product.”